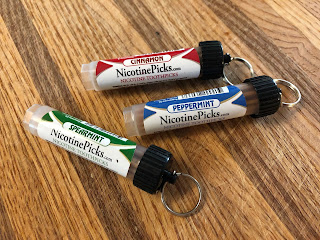 Last year I reviewed Pixotine Nicotine Toothpicks. I did a video on them, but not an article. So, I figured for these I would do an article and a video. Today we're going to be talking about NicotinePicks, which are also nicotine toothpicks. I mentioned this in my video, I love chewing toothpicks after I eat. I also love nicotine. The two put together seems like a no brainer. They describe these toothpicks by saying "Nicotine Picks are toothpicks infused with Nicotine and Flavoring. Nicotine Picks are infused under pressure so the entire fiber is exposed to nicotine and flavoring. The results are great tasting toothpicks that typically last longer than traditional nicotine products. Slightly chew the toothpick to control how quickly nicotine is being released. Nicotine picks contain zero sugar and zero calories." You get 20 picks per container, and each one contains 3mg of nicotine.  In this review, we'll be talking about three flavors:  cinnamon, peppermint, and spearmint. 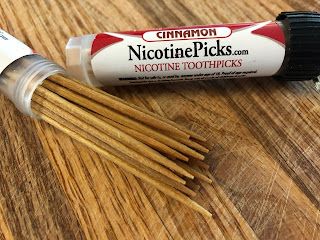 When you open the container, a present smell of cinnamon jumps out at you.  It almost reminds me of Big Red gum, a favorite of mine.  When you put one in, you'll encounter a nice, mild burn.  The flavor is a present, lightly sweet flavor of cinnamon.  Like the aroma, it also reminds me of cinnamon.  As far as the nicotine strength goes, I use 8mg/g-14mg/g Swedish Snus, so at 3mg these are a little lower than I'm used to.  However, if you're switching from cigarettes I believe you'll be satisfied with the strength of these to help curb your cravings or aid you in quitting smoking.

NicotinePicks: Peppermint have a present, fresh, lightly sweet smell of peppermint.  Like with the last ones, I encounter a mild burn whenever I put one in my mouth.  There's also a little cooling presence I feel in the lip.  The flavor is a present peppermint flavor, it's fresh, and has a touch of sweetness to it.  As far as the nicotine strength goes, as I mentioned with the last one, if you're quitting smoking or looking for something to aid you as you quit smoking, the nicotine strength of these could be adequate. 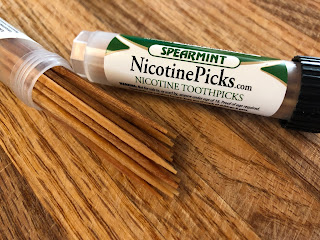 NicotinePicks: Spearmint have a mild, gentle spearmint aroma.  Like with the last ones, I notice a mild burn in the lip, but also a gentle cooling presence, as well.  The flavor is a mellow, lightly sweet flavor of spearmint.  As far as the nicotine strength goes, it's the same as I said with the previous two.  Not as strong as I'm used to, but I think those looking to quit smoking will find it to be satisfactory.

As someone who loves toothpicks, I enjoyed these products.  I chew on toothpicks after every meal and now that I know these exist I'll be keeping some around for future use.  I also really like the clip on them, so I can keep them on my keychain for whenever I need them!
Posted by Chad Jones at 4:47 PM