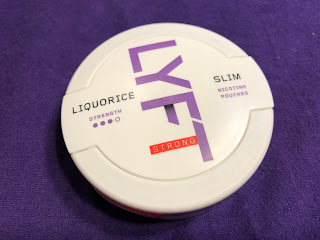 The can says "liquorice", I'm an American so I say "licorice", and in Sweden it's called "lakrits" - so whatever you want to call it, this is the licorice flavor of the Lyft Nicotine Pouches line.  Now, the nicotine pouch category has been growing more and more for the past few years, and now it appears as though BAT/Winnington (makers of Epok) are getting into this category with their new Lyft product! Lyft is a nicotine pouch product that is made from eucalyptus and pine fiber. Lyft does not contain tobacco, but does contain nicotine. Lyft comes in all the same flavors as Epok, so if you're wanting to switch from Epok (which contains tobacco) to Lyft (which doesn't contain tobacco), you will be easily able to find your favorite flavor.

The flavor description says, "The taste of licorice is clear and contains elements of anise and salmiak."  This product comes in a 16.8 gram can with 24 portions for 0.7 gram portions. The nicotine content is 14mg/g (1.4%) for 9.8mg/portion.  Note, this is the same as Epok Ice Cool Strong in terms of contents and nicotine level. 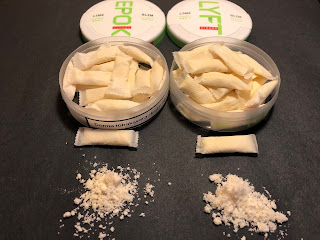 I won't go too in depth on the differences between Epok and Lyft, but if you want to know more, I wrote an article about it, and I also did a video about it.  But here's a photo just so you can see it real quick.  You'll notice the cans look similar except the name, the portions look similar, and even the material inside the pouch looks similar.  The way the pouches feel in the lip, the way the nicotine releases, and even the flavors are all very similar as well.  So if you like Epok, you'll probably also really like Lyft. 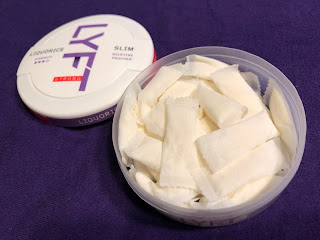 So, this product seems almost identical to Epok Licorice Strong, even though Lyft Licorice Strong doesn't contain tobacco. I was really impressed with that.  When you open the can, the aroma is a black licorice smell with a hint of anise.  The portions are slim, soft, and feel very comfortable in the lip.  The flavor is a present flavor of black licorice with a mild hint of anise in the background and a light herbal character.  This product, like the Epok version, packs a solid kick!  The nicotine comes on rather quickly, and hits pretty hard, given it's nicotine strength.  It feels right at the extra strong level. The flavor, on average, lasts about 45 to 55 minutes.

I enjoy tobacco and don't plan on ever switching to nicotine pouches, but I will say this - these are some of the best nicotine pouches I've tried yet.  I think BAT/Winnington did a great job with these!
Posted by Chad Jones at 3:04 PM