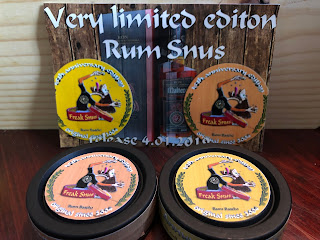 Today I'm going to be reviewing a few products made by my friend Snusfreak. These are products he made to celebrate Snusfreak.com's 15th anniversary. I've reviewed a few of his products before, including his tobacco flavored FreakSnus Batch 01 and 02 in 2016 and most recently his FreakSnus Jim Beam Honey last month. He's reviewed my Snubie Brandy Alexander and Snubie Blood Orange and Goji Berry Lös as well. For this snus, he made two batches, each one with different tobaccos, and he  flavored this new snus with Malteco Rum (Aged 20 Years). I've never had this rum, but it's rated 7.5/10 on RumRatings, so it seems to be a good one. He also mentioned this snus took him about half a year to make and was made in collaboration with Kungssnus. 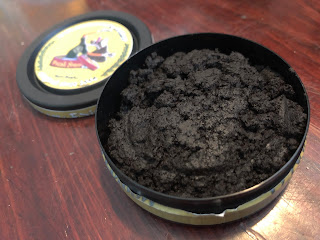 When you open the can, the aroma is a very present smell of rum, an earthy tobacco presence, a light smokiness, and a little sweetness. The tobacco itself is great - easy to work with, moist, soft; kudos to Snusfreak for how the lös itself turned out. The taste is a present flavor of rum with a rich, earthy tobacco character. It's lightly smokey but not too smokey. There's a light sweetness and a touch of wood. This one has a really well rounded, balanced flavor. The nicotine level feels to be about regular strength and the flavor, on average, lasts about 45 minutes. 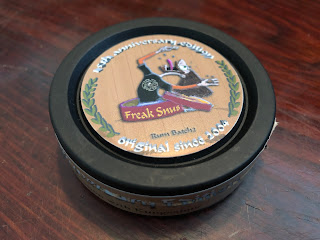 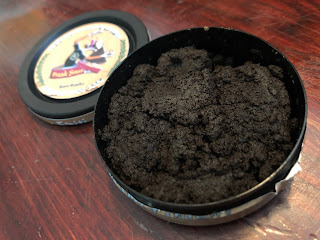 I really enjoyed both of these - thanks to SnusFreak for letting me try them!  He did a great job on these, they both have a great flavor!
Posted by Chad Jones at 3:35 PM