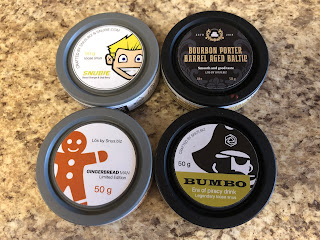 I recently did an order with Snus.biz to try out some of their new flavors I've been curious about. Today, I'm going to review 3 of them. In this review, we're going to talk about Bumbo Lös, Gingerbread Man Lös, and Barrel Aged Porter Lös. If you aren't familiar with Snus.biz, they're a Swedish Snus manufacturer located in Ukraine. Yes, Ukraine. Before you ask, yes, their snus is legit. Everything they produce is done in small batches, so each product has special attention paid to it's quality.  I'm not just saying this because they're the producer of three of my snus products - Snubie Blood Orange & Goji Berry Lös, Snubie Mr. Bacon Lös, and Snubie Bacon and Cheese Lös.  I also happen to be a user of their products.  But, cheap plug, if you want to try any of my snus products - you can order them, here.

Pay special attention to the can designs below, as well.  Snus.biz is making their cans look better than they originally looked.  When I first reviewed their products in March of last year, the can designs were very bland and basic.  But now, they're looking much better! 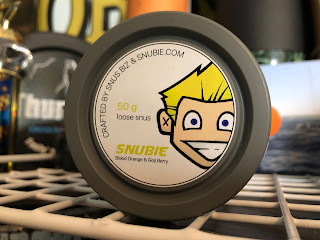 This isn't a review of this product, but I did want to show the new can design.  We switched the black can to a grey can, and I think it looks much better this way.  If you're interested in reading that review, you can check it out - here. 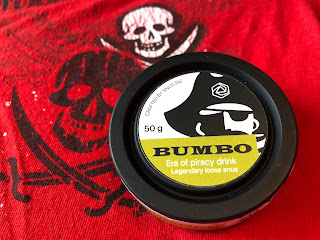 Bumbo Loose is a snus with flavors of dark rum, citrus juice, grenadine, and nutmeg.  Bumbo was a popular drink in the Caribbean during the era of piracy.  I've never had it before, but it sounds tasty.  The tobacco comes in the combo grind, which is a mix between long cut grinding and traditional snus grinding.  This snus has a nicotine strength of 19mg/g. 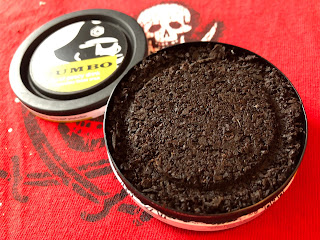 When you open the can, the aroma that jumps out at you is a fresh citrus smell and hints of dark rum. There's a little tartness to the aroma, which may come from the grenadine. As with the last one, the tobacco comes in the combo grind, which is a little different than you regular snus grind, but allows for a unique release of flavor. It's not as easy to handbake as the usual grind of snus, but it's still doable. If you don't wanna bake it, you can do the farmer's pinch and be on your way!  This snus has a really nice taste.  The tobacco flavor is present, earthy, and rich.  There's a present citrus taste to it which seems orange-y in nature.  There's a light sweetness which I suspect may be from the nutmeg and a little tartness which is probably from the grenadine.  The flavor of rum is relatively mild and in the background and mixes well with the citrus flavor.  I really dig the way this stuff tastes.  The nicotine feels to be around the extra strong level and the flavor, on average, lasts about 45 minutes. 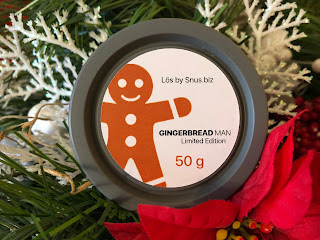 Gingerbread Man Loose contains a mix of Golden Virginia and Cuban Partagas tobaccos.  The tobacco comes in the combo grind, which is a mix between long cut grinding and traditional snus grinding.  The flavor is a mix of ginger root, ginger molasses, and organic vanilla, and comes in a nicotine strength of 19mg/g. 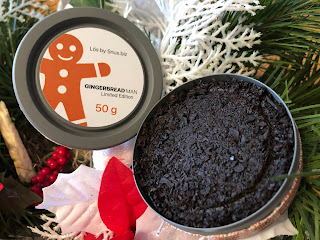 Yes, I know, Christmas is over. But, I still wanted to give this one a try. When you open the can, the sweet, present smell of ginger greets you along with light tones of vanilla. The tobacco comes in the combo grind, which is a little different than you regular snus grind, but allows for a unique release of flavor. It's not as easy to handbake as the usual grind of snus, but it can be done. If you don't wanna bake it, you can easily just shove some under your lip and be good to go! The flavor of this one is an earthy, slightly spicy tobacco flavor complimented by a present taste of ginger, a hint of vanilla, and some light sweetness. It's a really nice flavor. The nicotine strength feels firmly at the extra strong level, and I find the flavor lasts up to about 45 minutes! 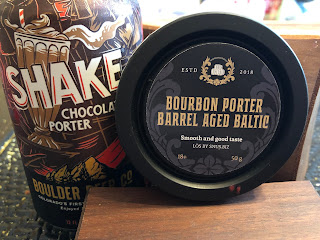 Bourbon Porter Barrel Aged Baltic Los Snus has a hint of bourbon, an invigorating aroma of freshly brewed coffee, a rounded chocolate malt backbone, hints of toasted oak, and a balanced touch of vanilla for a smooth finish.  This snus contains a mix of three tobaccos:  Turkish Dubec, Cuban Partagas, and Golden Virginia.  The tobacco was aged for six months in old oak barrels, similar to the Perique tobacco aging process.  The tobacco comes in the combo grind, which is a mix between long cut grinding and traditional snus grinding.  This snus has a nicotine strength of between 15mg/g-25mg/g. 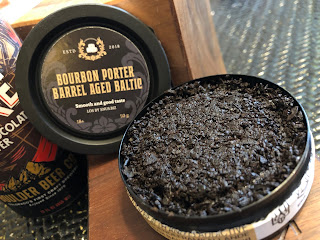 I don't drink a lot of porters, but I love beer, so I was very excited to try this one. If you aren't familiar with porters, they're dark beers, originally developed in London around the 1800s. They come from a brown malt, and the name comes from their popularity with river porters.  When I reviewed this beer, I paired it with Boulder Beer's Shake Chocolate Porter.  I was just in Colorado a few weeks ago and grabbed some to bring back with me to pair with this snus.  Now, on to the review!  When you open the can, the aroma that greets you is utterly beautiful; there are aromas of bourbon, chocolate, coffee, vanilla, and oak.  It is a beautiful medley!  Like with the last two, the snus comes in the combo grind which isn't the easiest to handbake but again, it can be done.  Or, you can just grab a pinch and throw it in your lip and be on your way!  The flavor is absolutely delicious.  The tobacco flavor is rich, earthy, and has a slight spice to it.  There are rich notes of chocolate, bourbon, coffee, and vanilla.  In the background I find tones of oak, and a light smokiness.  It's a very well rounded, well done flavor.  The nicotine strength feels right at the extra strong level and the flavor, on average, lasts about 45 minutes.

I really enjoyed all of these products, but my favorite of the three new ones I hadn't had yet (Bumbo, Porter, and Gingerbread) was definitely the Porter flavor.  It may be one of the best tasting snuses I've had in a while.  All three were great though, and I'd definitely suggest giving each one a try if you haven't yet.  Cough cough, don't forget my Snubie Blood Orange and Goji Berry Los.  Sorry, I had to throw that in there.  Happy Snusing!
Posted by Chad Jones at 11:55 AM