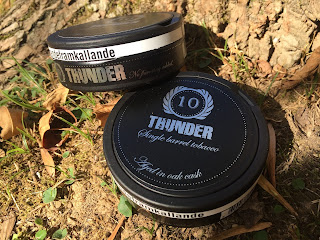 This was certainly a surprise - V2 Tobacco has decided to release another batch of Thunder 10! In June of 2016, I reviewed Thunder 10 Year Anniversary Edition, which I considered to be one of the best V2 Tobacco products I've ever tried. It was released as a limited edition, and once it sold out it was gone. V2 did continue the flavor in the Thunder 10 Chew Bags, which I reviewed last month, however those came in a white portion and the Thunder 10 snus came in an original portion. But it appears now that V2 has brought it back, which is great because this is a decision snus! Last year's flavor description for this product said Thunder 10 "is made from fermented tobacco aged in oak casks. It’s a pure tobacco, high quality and a very high natural nicotine content which comes on very smooth. No additives! Just tobacco and water."  This product comes in a 19.8 gram can with 22 portions, for 0.9 gram portions. The nicotine content is listed at 22mg/g and is said to have that level by using a larger proportion of tobacco leaves per gram of snus. At 0.9 gram portions, that would be 19.8mg/portion of nicotine. 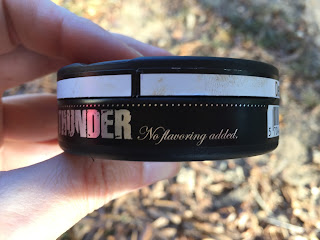 No added flavor.  That is truly a beautiful thing. People in the snus community have, for years, asked for a snus with no added flavor.  Last year, this is how V2 Tobacco described the production of this snus:  "The tobacco used is from the Arapiraca region. The Arapiraca, or Mata Fina tobacco, is a traditional Bazillian dark air cured variety and is one of the oldest known tobacco seeds in the western world. In fact, the first exports date back to 1570 and the Portuguese crown. The Perique fermentation used is an anaerobe barrel fermentation. The leaves are placed in wooden barrels under high pressure. Every few months they take the leaves out, put the bottom ones on top and press them back. The whole process takes about 12 months. The oak barrels themselves are made from the same native wood that is used to produce wine in South America." 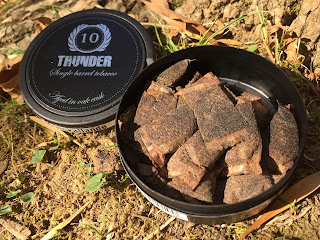 Comparing this batch to last year's batch it seems to be virtually identical! There are two differences, however. First, the can looks more like the Thunder 10 Chew Bags and not like the Thunder 10 Year Anniversary Edition can.  Next, the portions are much more moist.  However, the aroma and taste seem to be very similar to last year's batch. The aroma is a very raw, robust, natural tobacco smell along with present hint of oak. Thunder 10 smells a lot like a good cigar! The portions are very moist, so there is a quick release of flavor and nicotine. They're also quite soft and feel very comfortable in the lip! The taste is where this product shines. It is a very natural tobacco taste. No sweetness, no salt, no pepper, just a raw tobacco taste. The flavor is very woody, with the oak notes peeking through the tobacco taste. The tobacco flavor is very rich, and seems to have a light spice to it, as well. The taste is bold, but is also very well rounded and earthy at the same time. This is a tobacco lovers snus!  I've found the taste lasts up to about 45 minutes.  The nicotine, though listed at 22mg/g, feels to be about the extra strong level.  It has a nice, solid kick to it!

I've seen SnusBolaget.se already has it listed, but I haven't seen it for sale to the US yet. I'm sure the US web stores will eventually stock it, however. And when they do - don't miss out!
Posted by Chad Jones at 3:16 PM