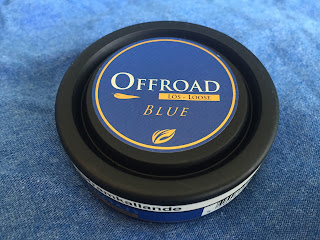 Earlier this year I reviewed Offroad Selection: Blue (Original Portion). I didn't know it at the time, but I recently discovered that V2 discontinued Phantom Blue Portion and Phantom Blue Los. I'll admit, I was never a fan of Phantom Blue. I liked the Phantom Blue White Portion but never could get into the original portion or the los version. I wasn't the biggest fan of the Offroad Selection Blue, but it was noticably better than the Phantom Blue Portion.  Now, V2 has released a loose version of Offroad Blue, presumably to replace the delisted Phantom Blue Los.  Our friend Michael grabbed a can of this for us to review, so a special thank you to him.  The flavor description at SnusBolaget.se says, "Offroad Blue Loose has a powerful but balanced taste of juniper berries. A classic snus taste that many recognize."  This product has a regular 8mg/g nicotine content and comes in a 37gram can. 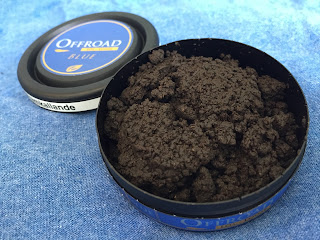 When you open the can, a present smell of juniper jumps out at you. I will note, as I have with other V2 "blue" products, it has a smell that is similar to Windex. The tobacco itself is moist, and has a grind that is very easy to handbake. I also noticed a mild cooling sensation when I put the prilla in my lip, which I also noticed with the portion version as well.  The taste of this one isn't too bad.  The juniper flavor is present in the taste profile, but it still has the mild Windex-type flavor to it.  Since it's a los, I notice more tobacco in the flavor profile than I did with the portion version.  There's a light hint of salt, and a very light floral presence.  Being a regular 8mg/g snus, the nicotine strength feels to be about the normal strength.  The flavor lasts a good amount of time and the snus stays pretty well-packed in the lip with little breakage or mudslide.

If you liked the flavor of Offroad Selection: Blue (Portion), this one is worth a try.  It's not something that I would probably order again but I will say it's much better than Phantom Blue.  It's 299kr for a roll (about 37.00 USD), so it's a cheaper alternative if you're into the juniper flavor profile!
Posted by Chad Jones at 6:30 PM