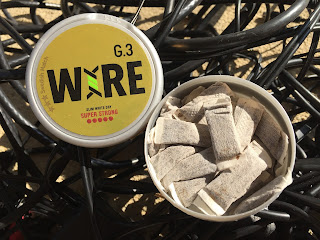 Recently, Swedish Match released G3 Volt Super Strong (Slim White Dry). G3 Volt would be Swedish Match's first push into the "super strong" nicotine category, and also their first full size "white dry" product, a segment that GN Tobacco has been dominating for several years now. G3 Volt was a mint product, but this one isn't. Swedish Match describes the flavor as a  "taste of red berries and tropical fruits, combined with 30% more nicotine and 20% less drip than G.3 Extra Strong, the snus creates a long-lasting burning effect, and a spicy and biting feeling under the lip." 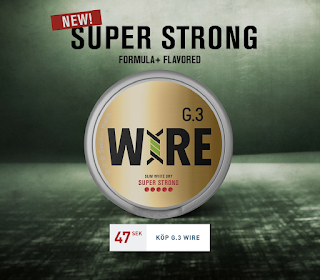 If that flavor description sounds familiar, it should. Swedish Match recently discontinued The Lab 13 Formula+ when they announced this one, so this product is taking over for that one in the "energy drink snus flavor" category.  In fact, their ad for the product from their webstore actually says this product is "Formula+ Flavored".  That pretty clearly indicates that this product is a replacement for Lab 13 Formula+.

G.3 Wire comes in a 16.6 gram can with 24 portions, weighing in at 0.69 grams per portion. The nicotine content is 2.6%, or 26mg/g. That breaks down to 17.98mg/portion.  The ingredients do not list anything like caffeine or taurine or anything of that nature, so though it may be reminiscent of energy drink in taste and aroma, that's about as far as it goes. 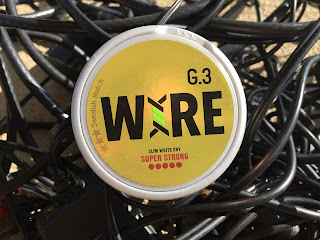 When you open the can, the aroma that comes through is virtually identical to Lab 13.  The aroma has a present smell of red berries and a very tart smell, almost like what you encounter when you open an energy drink.  The portions are slim, and dry to the touch.  They're also light, only weighing in at 0.69 grams.  As with most white dry portions, they get more comfortable the longer you have them in your lip and the more moist they get.  A few minutes after you put a portion in you'll notice a nice burn in the lip.  It's interesting because there are very few products I encounter that with.  The nicotine comes on pretty quick, I feel it kick in at around the 5-10 minute mark, which is quite impressive for a white dry.  Usually the nicotine comes on a little bit slower.  The taste is also very close to to Lab 13, but since it's a white dry portion it's a little milder.  I notice a mild tobacco character, a light nutty character, a red berry taste, and some tartness. It's like if you blended The Lab 07 White Portion and the berry/tart taste from an energy drink. It's a pretty tasty snus!  The flavor is a little milder since it's a white dry, but it also has the added benefit that the white dry format delivers - long lasting flavor!  I've found I can enjoy this one for over an hour!  As far as the nicotine goes, it's 26mg/g total 17.98mg/portion.  That may sound low, but this snus gives a surprisingly strong kick, much stronger than other snus products of similar strength.  It feels to be well above the extra strong level but not as strong as Thunder NRG, Thunder X or Siberia Red.

If you're a fan of Lab 13, you should definitely give this one a try.  If you're a fan of energy drinks, you will definitely love this snus.  It's a great tasting snus with a long lasting flavor and a great nicotine kick.  For me, this isn't a product I would use all the time, but it's one I might use from time to time.
Posted by Chad Jones at 3:30 PM