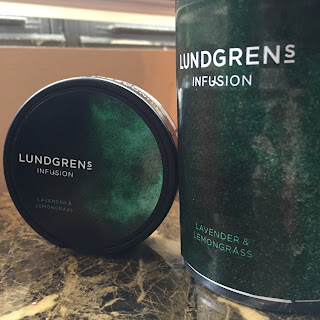 The folks at Fielder and Lundgren have released a second product in the Lundgren's Infusion line! This product was released as a SnusBolaget exclusive. Thankfully, a good friend of ours in Sweden acquired some of this for us to review. I say this is a second product because as you may recall, Fiedler and Lundgren released a limited edition Lundgren's Infusion product back in 2016. This one was available to the US and a majority of the feedback I saw for it was quite positive!  I personally greatly enjoyed the 2016 version of Lundgren's Infusion when I reviewed it.  Like the limited edition Lundgren’s Infusion, this year’s edition is based on the infusion technique. This is a new way to flavor snus, in which steam with the natural botanical aromas are blown through the tobacco to add flavor. This bonds the flavors to the snus at a molecular level which gives a deeper, more filling, and longer lasting taste.  It's a very interesting technique! 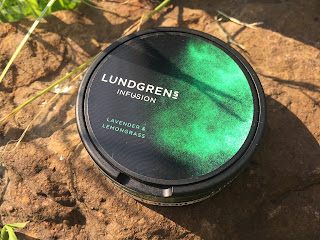 The description for this product says, “The idea behind the Lundgrens Infusion is, that the snus experience always can be improved. The tobacco blenders from F and L infused specially selected Swedish tobacco with Lavender from Provence and Thai Lemongrass. Lavender and lemongrass botanicals are used because they offer an exceptional taste experience. The Lavender bring fullness and floweriness to the snus taste whereas lemongrass brings freshness and creates an edge to aroma and taste. The result is a deeper and more filling taste for a longer lasting experience. And as with the rest of the Lundgrens family, Lundgrens Infusion is made with locally grown tobacco from Skåne.” The 2016 version had juniper, this one does not. When you look at the bottom of the can, it also mentions that this version has ginger and eucalyptus in it, which was also present in last year's version. This product comes in a 21.6 gram can with 24 portions, for 0.9 grams each. The nicotine is 8mg/g, which breaks down to 7.20 mg/portion. 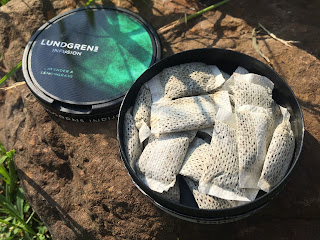 When you open the can, you'll notice that the portions are perforated, like F and L does with other Lundgren's products. I really enjoy this because it has a quick flavor release, but also a long lasting flavor! Also, for those who have never had a perforated portion, the tobacco bits don't come out and get stuck in your teeth so don't worry!  Upon opening the can a light herbal aroma greets you, accompanied by a mellow lemon presence and a gentle touch of lavender.  The portions are soft to the touch and feel quite comfortable in the lip.  The taste is quite good!  There is a present herbal taste accompanied by a light presence of lavender.  The lemon taste works really well with the herbal/floral combination, providing a gentle taste of lemon and a light tartness.  There is also a mellow taste of tobacco in the background, as well.  It's a complex, but very well rounded taste.  The nicotine feels to be about regular strength, which I enjoy because I don't use a lot of strong snus.  The flavor also lasts quite a while!  I've been able to enjoy this snus for up to an hour, sometimes an hour and fifteen minutes.

I hope someday this will become available to the US.  This is definitely something I would order in the future for use as an occasional snus.  If you have access to it, definitely give it a try.  Fiedler and Lundgren hit a home run with this one!
Posted by Chad Jones at 7:57 AM