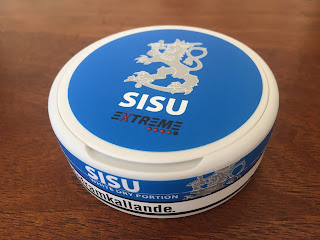 SISU Extreme White Dry is a new product from AG Snus. It's their first white dry product, and it's their first "extreme" or ultra strong product. The product description for SISU provides some interesting background on the product. It says “SISU Extreme has a refreshing and intense flavor of spearmint and menthol! The evenly filled portions are soft to the touch and have a great feel under the lip. They are dry which give a low drip but a long lasting release of flavor and strength. Strengthwise it lands on 20 mg/g which gives a powerful release of nicotine, and classifies it as ultra strong. SISU is an expression from Finland that stands for determination and bravery, it's about sticking with it even when the going gets tough - SISU is good character and now also a good snus!” The can weighs in at 11 grams, containing 17 portions at 0.65 grams per portion. The nicotine content is 2.0%, or 20mg/g, which breaks down to 12.94mg/portion. It’s interesting to note that BuySnus.com calls this a “Soft White Dry Portion”, which to my memory is the first time I’ve seen that phrasing used. 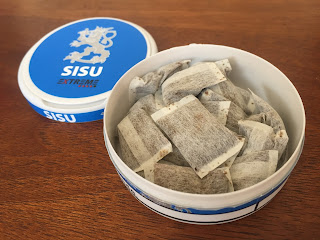 When you open the can, the aroma that comes through is a sharp mint smell. It’s an aroma of spearmint mixed with menthol, but it’s sharp in the way a peppermint snus is in terms of aroma. The most interesting thing about this product, however, is the portion. It is the absolute softest white dry portion I’ve ever felt. And it is in the running for softest snus portion I’ve ever felt. The portion material is extremely silky, soft to the touch, and feels fantastic in the lip. Being a mint snus, you also get a nice cooling sensation in the lip, which spreads throughout the mouth, as well! The flavor is interesting, in that I taste a mild tobacco taste in the beginning. It does fade out eventually, and the flavor of menthol mixes in with spearmint behind it. The flavor lasts a good amount of time, up to about an hour and fifteen minutes. The nicotine kick is strong, but not overwhelming. It feels to be between a strong and an extra strong.  I had heard that this product was supposed to have a faster release of flavor and nicotine, but I didn't notice the delivery of either to be any quicker than any other white dry product I've had in the past.

SISU is an interesting product.  In terms of taste, it's a solid flavor.  It doesn't stand out, by any means, but it does have a nice taste to it.  The best part about this product, in my opinion, is the portion material.  It does not feel like a white dry product.  If you're a fan of mint snus, I'd definitely suggest giving this one a try!
Posted by Chad Jones at 2:04 PM