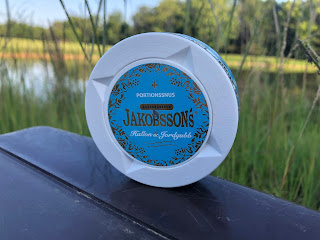 In 2012, Gotlandssnus launched Gotland's Summer Snus, which was flavored with smultron, a wild strawberry that grows in Swedish forests during the summertime. In 2016, Gotland's Summer Snus had a change in the flavor. This time, the flavor was changed to have a "tobacco flavor with hints of raspberries and strawberries, and herbs". In March of this 2019, they announced their product line would be going through a redesign and now the cans look like this.  Also, limited editions would no longer be under the Gotlandssnus label, but would now be Jakobsson's products. Summer Snus was renamed to Jakobsson's Hallon and Jordgubb, but would retain the same flavor.

The flavor description says this snus has a flavor of "fresh raspberries accompanied by a refreshing taste of Swedish strawberries with just the right touch of sweetness."  This snus comes in a 20 gram can with 20 portions, for 1 gram portions.  The nicotine content is 10mg/g (1.0%), which easily breaks down to 10mg/portion. 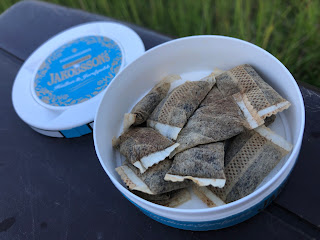 When you open the can, the aroma that comes through is a fruity, natural berry smell.  It isn't too sweet and comes through in a very pleasant way.  The aroma seems to blend the strawberry and raspberry equally.  As far as the portions go, they're fantastic.  I've always been a big fan of Gotlandssnus original portions because they're not too moist, so there's a great balance of the longevity of a white portion, but the quick flavor release of an original portion!  In the flavor department, I notice the raspberry to be slightly more present than the strawberry.  Both tastes are easily detectable, but I pick up a little bit more raspberry than strawberry.  The taste comes through in a natural way that isn't too sweet!  The nicotine feels to be about regular strength.  Though it is a 10mg/g nicotine strength, it doesn't feel too strong and delivers nicotine much like a regular 8mg/g snus would.  The flavor lasts a good amount of time, up to about the 45 minute mark.

All in all, this is a pretty tasty snus.  It's not something I could use full time, but I enjoy these limited edition releases to throw in every now and then.  This is a great summer flavor and one to use throughout the warmer months!
Posted by Chad Jones at 10:21 AM