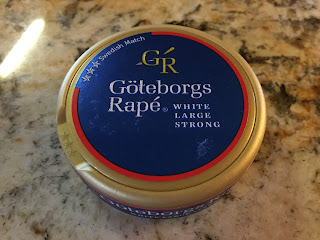 NOTE:  This product was discontinued in August, 2018.

Göteborg's Rapé White Strong is a new-ish product from Swedish Match. Some of you may remember last summer I reviewed Göteborg's Rapé White Stark, which was a limited edition GR produced in partnership with Salong Betong, a Swedish tattoo shop. The product was released as a limited edition, but once it was gone people kept asking for Swedish Match to bring it back! They heard the voice of the fans and now Göteborg's Rapé White Strong is back as a full time addition to the lineup! The product description says, "Almost 100 years after the original, we are now launching Göteborg’s Rapé permanently in a stronger variant - Göteborg’s Rapé White Strong. A strong snus with 1.2% nicotine content and the characteristic flavor of Göteborg’s Rapé. The snus has a light and spicy tobacco character with clear elements of lavender and juniper, as well as some wood and citrus. A portion that is dry on the surface with moist content for low drip and a lasting taste release.” This snus comes in a 21.6 gram with 24 portions weighing 0.9 grams each. The nicotine content is 12mg/g (1.2%), or 10.8mg/portion. 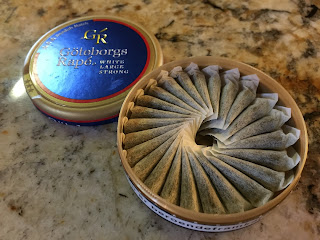 If you had last summer’s release, this product is the exact same, but in a different can. Göteborg’s Rapé is flavored with juniper, which is best known for flavoring gin. If you’ve had gin, you know what that tastes like. If not, it’s a slightly bitter fruit taste, almost bittersweet. When you open the can of GR Stark, the aroma is a present juniper smell with hints of lemon, herbs, and floral notes. The portions are soft to the touch and feel great in the lip! Juniper is very present in the taste, and it’s accompanied by a light citrusy taste, as well as herbal and floral notes. The flavor lasts about an hour, so you’ll get a good amount of life out of this snus. The nicotine is strong, clocking in at 12mg/g. However, it isn’t too strong. I do notice a little extra nicotine with this one, but not too much. It’s not enough that it’s going to knock you out or anything.  If you're a fan of Göteborg's Rapé and want a little extra nicotine, this is a great product to try!
Posted by Chad Jones at 6:46 PM