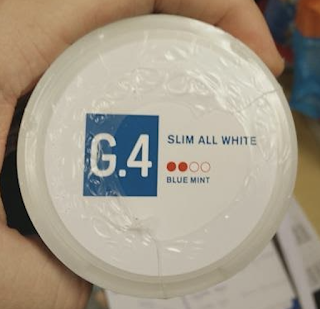 UPDATE:  Read our full review of this product - here!

After Winnington launched their Epok snus line, I was curious if other companies would follow suit. It appears as though Swedish Match views the white tobacco category as worthy of exploring, and they've been releasing more products that are "all white". I've reviewed their General Omni line, as well as their Zyn NT line. Now, it looks like they are trying to launch a full size white tobacco product with G4 All White (Blue Mint) Slim.  The fact that it has the G4 name shows that Swedish Match must be serious about this product.  They seem to view it as Generation 4 snus.   First came General Los in 1866, which they view as Generation 1. Then came portion snus in 1977, which they view as Generation 2. Next came General G3 in 2014 which focused on having slim fit, long lasting, soft fit, and minimal drip snus, which they view as Generation 3. It appears as though this is a big deal to them as they seem to be viewing it as Generation 4. The 5 can rolls of this product say "WHITE SNUS REDEFINED: It is an all-white slim pouch before, during and after use. The all-white snus delivers a soft texture with a lasting flavor." 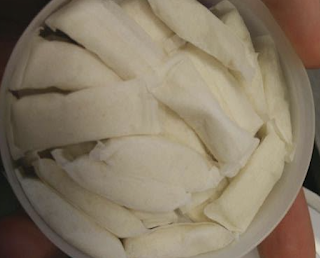 A friend of ours who sent us these photos had this to say about it: "At first I thought the tobacco was moist, because the pouches felt really soft, both to the touch and in the lip. Just like any other Swedish Match slim white portion really. But to my surprise, after further investigation, the contents were dry. I could not feel any moisture in it what so ever. These feel not like the Omni pouches in any way. The portion material is much softer, and does not cause any discomfort in the lip at all. Each can contains 24 pouches and 19.2g, which equates to 0.8g per portion. Nicotine strength is at 2/4 on the Swedish Match scale of power. I find it somewhat weird that the nicotine percentage is not listed on the bottom of the can, as there is no ban against it in Norway (G.3 Volt even has it listed). I think it's obvious that Swedish Match is making this product to compete with the Epok line of snus. The can is even see-through, just like the Epok cans."

I'm not sure when this will launch in the main e-stores, but I look forward to trying it!
Posted by Chad Jones at 5:22 PM