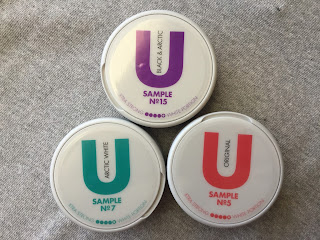 NOTE:  This is the old review.  These products have been updated/changed, so check out the new review, here.

I recently reviewed five new Ink Chew Bag products by AG Snus. It appears now that AG Snus has launched another line of chew bags, with a very interesting name.  When I saw the name, I thought these were samples or test products.  No, the name actually is U-Sample.  These products are produced by AG Snus, but may say "Lakrisan", which is a subsidiary of AG Snus that handles distribution.  They may also say Mac-Baren, which is another company that has distributed their products in the past.

This is how AG describes U-Sample: “Based on our market knowledge, we have developed a completely new series of Chewing Tobacco portions under the brand U Sample. U Sample is "your mix" - your personal right choice and your preference.  U Sample series is designed for the more mature and conscious consumers of tobacco products. The design is minimalist and clean - you think of Scandinavian simplicity and style.  Portioning is optimized in terms of size, strength and level of taste. Initially, we are launching three models in the series."  These cans remind me a lot of Swedish Match's Lab Series; they have a very clean and simple design. 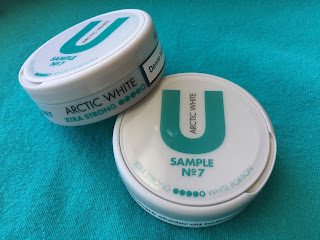 The product description for U-Sample Arctic White says, " Fresh pepparmint with sweetness and a high cooling effect from spearmint and menthol."  This product comes in a 16.8 gram can.  I counted 23 portions in the can, which is a portion weight of 0.73 grams per portion. TopSnus lists the nicotine content as "Strong (12-14mg/g)". 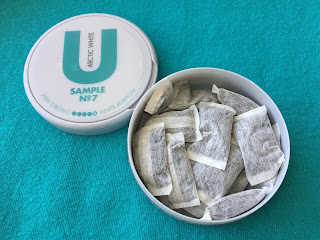 When you open the can, the aroma that comes through is a present smell of menthol, accompanied by a sharp smell of peppermint. The portions are light in weight, but have soft portion material! When you put a portion in your lip you’ll get a mild cooling sensation in the lip, but also throughout the mouth. The taste is a well balanced flavor of menthol and peppermint. I find the flavor lasts about an hour to an hour and fifteen minutes. The nicotine strength isn’t too strong; it feels to be stronger than regular strength but not as strong as an extra strong. If you like mint flavor, this one is a pretty tasty product! 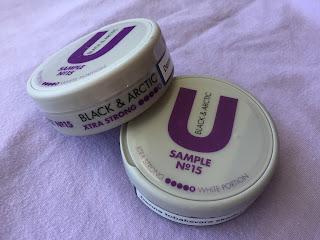 The product description for U-Sample Black and Arctic says, "A perfect match between sweetness form licorice and cool fresh taste of mint."  This product comes in a 16.8 gram can.  I counted 25 portions in the can, which is a portion weight of 0.67 grams per portion.  TopSnus lists the nicotine content as "Strong (12-14mg/g)". 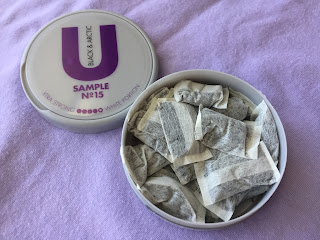 I’m not a big fan of mixing licorice and mint. Swedish Match did it with The Lab 24 and G3 Licorice Mint. For some reason, I just can’t get into that flavor profile. When it comes to this one, the aroma is a mild licorice smell with a touch of menthol. The portions are lighter in weight and have a soft portion material. I also encounter a present cooling sensation in the lip with this one. The taste is a pretty gentle pairing of mild licorice flavor and menthol. It’s not too sweet; the flavor is relatively mellow. The flavor lasts a good amount of time, up to an hour to an hour and fifteen minutes. The nicotine is pretty solid, it feels to be between a strong and an extra strong. Though this one isn’t for me, I would say if you’re into mixing licorice and mint to give it a try! 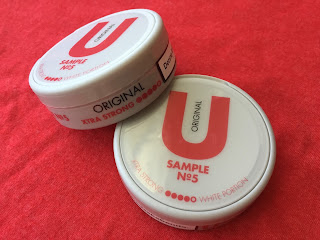 The product description for U-Sample Original says, "A classic taste of tobacco with medium flavor of fresh citrus/bergamotte and a sweet touch behind."  This product comes in a 16.8 gram can.  I counted 23 portions in the can, which is a portion weight of 0.73 grams per portion.  TopSnus lists the nicotine content as "Strong (12-14mg/g)". 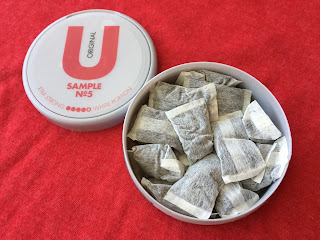 This one was my favorite of all three. The aroma is a nice balance of tobacco, citrus, and pepper. The portions are light in weight, and have a soft portion material. The taste is a nice blend of tobacco and citrus. The bergamot flavor is mild, and balances really well with the mild tobacco character. I also pick up a light touch of pepper in the taste. The flavor lasts quite a while, up to an hour and fifteen minutes. As far as the nicotine goes, I feel more of a kick from this one than I did the other two. It feels to be about an extra strong level. My friend John Spiers mentioned to me that this one reminds him of the old Gotland’s Gul (Yellow), and I can definitely see that comparison! If you’re a fan of traditional flavored snus/chew bags, this is a must try!

If you're somewhere that doesn't have access to snus but you have access to these, I suggest trying them out.  They're pretty solid.  As far as comparing them to snus, they're basically the same thing.  I honestly don't notice a difference between these and regular snus at all.  So don't let the "chew bag" name run you off if you're a lover of snus, these are still worth a try!
Posted by Chad Jones at 3:07 PM