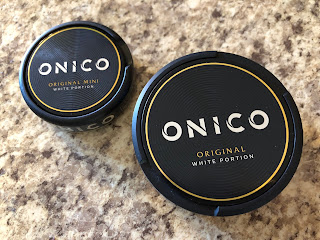 I've had a lot of people ask over the years for me to review more tobacco and nicotine free products. I reviewed one Onico product back in 2010, Onico+, but that's the only one I've reviewed from that line.  One thing I've always found neat about Onico is that, since it doesn't contain tobacco, they can advertise it in Sweden. I found this ad video recently, for example.  Onico originally launched in 2006 and was designed for people who want to cut down on their snus usage.  On January 23rd, 2019, Swedish Match announced changes to Onico:  "New improvements to have a darker taste than before.  In the new recipe, bamboo fibers were replaced with cocoa fibers for a more dark and fruity taste."  This is why I'm revisiting this product, due to the new flavor changes. 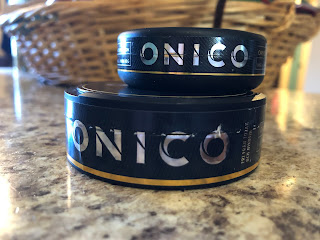 In this review, I'm going to cover the full size and mini size versions of Onico mini.  The tastes are identical, and the only differences is the portion and can size.  I wanted to include a photo of the mini can on top of the regular sized can just to show you how much smaller these mini cans are.  They fit great in the pocket! 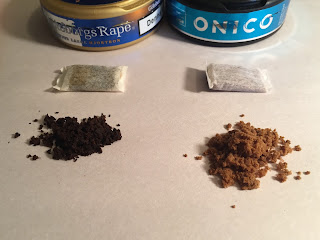 Onico is a tobacco and nicotine free product, containing water, plant fibers, moisture preservatives, salts, acidity regulating agents and herbal additives. All the additives in Onico are food approved. Onico doesn’t have any added sugar, but does have low levels of sugar due to it being naturally found in plant fibers. Onico originally contained corn starch when it was launched, but it no longer does, so no issues with the teeth and gums! It has a low carbohydrate content, and a basic pH level.  You can see the portions look similar to regular Swedish Snus, but the material inside the pouch looks different in color due to it being made from plant fibers and not tobacco. 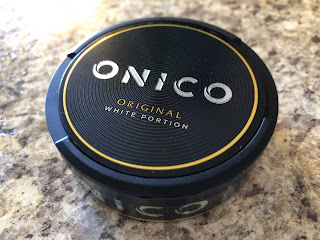 The flavor description for Onico Original (White Portion) says, "A mellow tobacco-like taste with distinct notes of bergamot, along with green herbs".  It comes in a 24 gram can with 24 portions for 1 gram portions! 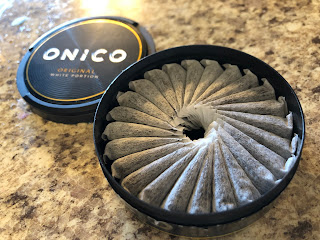 When you open the can, a very citrusy aroma jumps out at you.  It's very present, and has a nice tartness to it.  There's also a present aroma of pepper.  The portions are very soft and feel great in the lip!  These do come in the star formation, so I suggest fluffing them to move that material inside around, as it makes the portions more comfortable in the lip.  As far as the flavor goes, it's a balance of citrus and pepper.  The citrus flavor is very apparent in the flavor, and has a tart element to it.  There's also a pepper flavor, which seems to be more present than I notice in General White, for example.  The taste lasts about 45 minutes to an hour.  It's a pretty good tasting product.  It reminds me of a more peppery General White Portion without any tobacco taste. 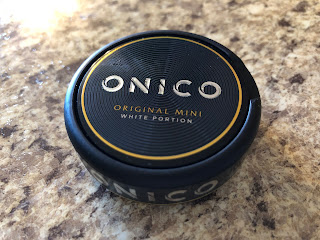 The flavor description for Onico Original (White Mini) says, "A mellow tobacco-like taste with distinct notes of bergamot, along with green herbs."  It comes in a 10 gram can with 20 portions, for 0.5 gram portions. 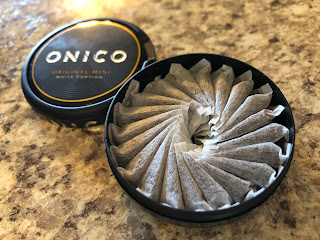 The review of the mini version is going to be super easy.  This product is basically the same as the one I just reviewed, but with a smaller can and smaller portions.  If discretion is the name of your game, Onico Original White Mini may be more up your alley than the regular sized version.

Now, you may be asking, "Why would I use this?"  Well, there are a few cases.  I like to use it at night before bed.  Nicotine is a stimulant, so I don't like putting nicotine into my blood when I'm trying to fall asleep, but I do like the feeling of a portion in the lip, so I'll use this before bed.  Also, people who are trying to quit snus may find this a nice way to ease out of using snus.  I've also heard pregnant women who are snusers will use this instead of snus. If you're interested in trying this product, I've seen it for sale at SnusDirect.com!
Posted by Chad Jones at 4:22 PM