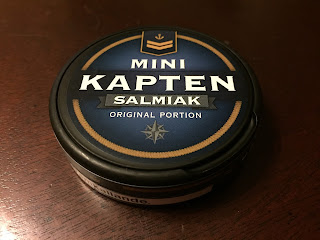 I recently reviewed Kapten Salmiak Vit Extra Stark, but I had no idea that this product existed. I found a can of it in my freezer's "Yet To Be Reviewed" bag, and couldn't even remember how I got it. But I'm a big fan of salmiak, so I was excited to give this one a try.  When it comes to lakrits candy to me, the saltier the better!  So, going into this one I was pretty amped to give it a try!  The flavor description says, "Kapten Salmiak mini (salty licorice) combines the nice flavor of salmiak and the traditionell snus flavour of tobacco." This is a 10 gram can with 20 portions, or 0.5 gram portions. The nicotine content is 6mg/g (0.6%), which breaks down to about 3mg/portion. 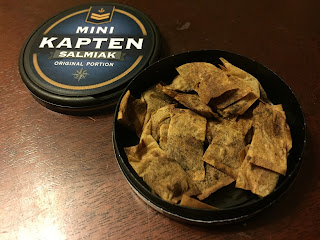 When you open the can, the aroma that comes through is a mild smell of licorice, a mild tobacco aroma, and a light sweetness. The portions are smaller, so I used 2-3 at a time when I was going through this product for review. The portions are also quite moist, so the flavor came on pretty quickly! The taste of this one is a mild licorice smell with a light sweetness. It also is saltier than the usual licorice snus, which I really enjoyed with this one! And like most Kapten products, they don't hide the tobacco flavor, so you can taste that in the background, as well. The flavor lasts up to 45 minutes, though I had some in the other day for up to an hour. But, generally speaking, at around the 45 minute mark the taste does mellow out and fade. The nicotine strength feels to be about regular when I have 2-3 portions in, so I imagine if you use mini portions and only use one you'll be pleased with the nicotine strength.

If you're a fan of salty licorice and mini portion snus, I definitely suggest giving this one a try!
Posted by Chad Jones at 2:06 PM