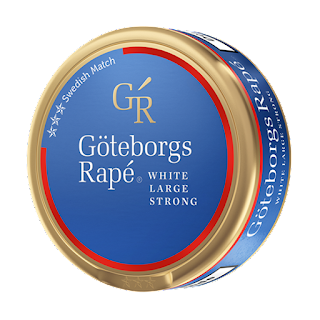 Swedish Match is introducing a new product in the Göteborg's Rapé product line - GR White Stark! Some of you may remember last summer Swedish Match, in partnership with Salong Betong, released Göteborg's Rapé White Stark. This product was a limited edition, but now it appears as though the product is coming back with a new design!  This time, it looks like it won't be a limited edition, however. The product is described as "a slightly stronger snus with a light and spicy tobacco character and clear elements of lavender, juniper, wood and citrus."  This snus has a nicotine content of 12mg/g, and the can weighs 21.6 grams.  I'm assuming there are 24 portions in the can.  It is set to launch in May, 2017.

Here's what Swedish Match has to say about it: "Now, almost 100 years after the first dose, Göteborg's Rapé is permanently launched in a stronger variant - Göteborg's Rapé White Large Strong.

Göteborg's Rapé is one of Swedish Match's classic brands, and at the same time it is also the taste that is easiest to recognize. The distinctive snuff in the gold-colored box with blue labels has a distinctive character of lavender and juniper berries.

In May 2016, a limited edition of Gothenburg Rapé Stark was sold, in a design collaboration with the Tattoo Studio Salong Betong. As demand was available, the decision to permanently expand the Göteborg Rapé family with a stronger snus was easy to take. We therefore present Göteborg's Rapé Strong; A strong snus with 1.2% nicotine content and the distinctive flavor of Göteborg's Rapé White Large.

Starting April 24, 2017, Göteborg's Rapé Strong is available in selected stores, our Swedish Match Stores and here on our e-commerce. In mid-May 2017 you will find the product in stores across the country."
Posted by Chad Jones at 12:17 PM