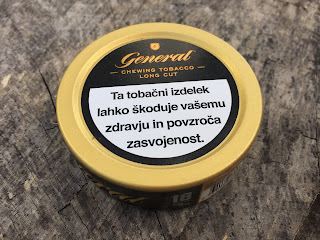 First of all - a big thanks to a friend of Snubie.com who got this over to us for review!  We appreciate any of our readers/viewers who help get us products that aren't for sale in or to the US.

I wish I could say I was writing this review for the US, but unfortunately, I'm not. General Chewing Tobacco (Long Cut) is a new product from Swedish Match exclusively, at the time of this writing, for the Slovenia market. This is another product from Swedish Match that is produced the same was as snus, but sold legally in the EU because it's labeled "chewing tobacco". I know, it makes no sense. We did a video recently about the differences between Nordic Chew (as it's called) and Swedish Snus, so if you want more info check that video out. This isn't the first time Swedish Match has broken into the EU market with products labeled as "chewing tobacco". I recently reviewed General Chew Bags Original & Strong, General Chew Bags Mint White & Strong, General Cut Original & White Strong, and General Cut Ice White & Extra Strong. It seems as though Swedish Match is looking to get more chewing tobacco products out into the EU market, which is great news for fans of harm reduced tobacco! 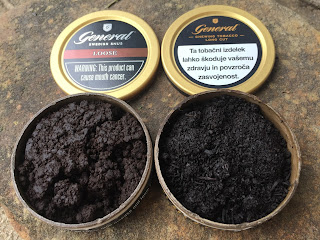 I wanted to compare the new General Long Cut to General Los, which you can see to the left. The cans look pretty similar, but the differences lies in what's inside the can.  The snus, on the left, is ground, whereas the long cut chewing tobacco, on the right, is cut.  What's interesting about this is that the General Long Cut tobacco is actually produced in Sweden, then sent over to the US to be cut.  Even though it isn't for sale in the US, it's interesting to note that General Long Cut exists in the US....but only when it is being cut.  It's a shame we can't buy it locally. I couldn't find a flavor description for this, but I assume it would be basically the same as General Los: “Spicy tobacco character with elements of bergamot, as well as tea, hay and leather.”  This one, however, comes in a 30 gram can with 13mg/g of nicotine.  So, it's a little bit stronger than General Los. 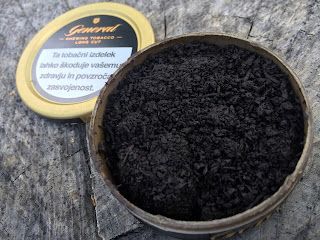 When you open the can, the aroma that comes through is a rich, robust tobacco smell. There is a little bergamot in the background, along with a little pepper, but the tobacco is more present in the aroma than the citrus. The long cut tobacco stays together pretty well in the lip; it is very soft and has a great moisture amount! I've used a tool and the pinch method, and both ways I've found the tobacco to form well under my lip. The taste is much like General Los! The tobacco flavor is in the front and it comes through in a very rich way. The citrus is in the background, behind the tobacco, accompanied by a little smokiness, a mild taste of salt and a touch of pepper. I would say it tastes a lot like General Los, but I notice more tobacco in the taste. The flavor lasts quite a while, up to about 45 minutes, and the tobacco stays pretty well packed in the lip! The nicotine content comes in at 13mg/g, and it feels to be stronger than regular strength snus, but it doesn't knock me out or anything. I'd say it falls between a regular strength and a strong.

If you're a fan of General Snus, and reside in Slovenia, this is a must try.  I never imagined I'd get to enjoy a long cut version of General Snus, but it was well worth the wait!
Posted by Chad Jones at 12:49 PM