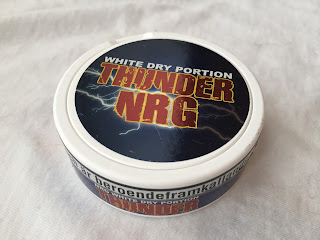 When I first heard about this product, I was pretty intrigued. In the snus world, there aren't many products that are in the "energy snus" category. When I first started snus in 2009, there was a product I really enjoyed, Elixyr Power Energy. There weren't many people who liked it, but a few of us were die hard supporters of it until it was discontinued. That product had 12mg/g of nicotine, caffeine, and taurine. Most people didn't like the taste, some even complained that the aroma smelled like cat urine. But I was a big fan - it was one of the first snus products I used in the mornings. In 2014, Swedish Match released The Lab 13, the first "energy" snus I've seen since Elixyr.  However, that snus didn't contain caffeine or taurine like Elixyr.  And now we have Thunder NRG by V2 Tobacco.  This snus doesn't have added caffeine or taurine either, but it does have a high nicotine content and an energy drink type flavor!

The flavor description of this snus says, "Thunder NRG has a refreshing taste of energy drink underlined by the explosive amount of nicotine." This snus comes in an 11.7 gram can with 18 portions. The nicotine content is 45mg/g (4.50%). With 0.65 gram portions this breaks down to about 29.25mg/portion. 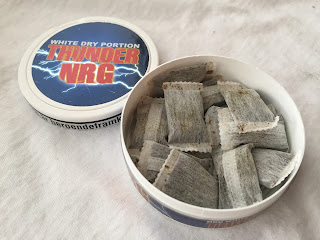 These are white dry portions, which means the portions are going to be dryer than your average white portion. At 0.65 grams, they're also going to be a little bit lighter than your average snus portion. That does have a few benefits, however. In some places, snus is taxed by weight, so removing the moisture means less weight based tax. White dry portions also last longer, so you can keep them in longer and don't have to change your portions out as often.  When you open the can, the aroma that comes through is the familiar energy drink smell.  It's slightly tart and mildly spicy.  When you put a portion in, you'll notice a mild burning sensation followed by a cooling presence.  The portions are dry, so they aren't too comfortable at first, but once you get some moisture going they feel better in the lip.  The flavor takes a little while to develop, and it is clearly milder than the original portion version.  The taste is a mild energy drink type flavor, a light berry/fruity taste, and some tartness and a light spiciness.  I don't notice as much tobacco taste in this one as I did with the original portion, however.  I feel the nicotine hit at around the 8 minute mark, and I can usually keep these in for 20 to 30 minutes, but after that they become too strong and I have to take them out.  I don't use a lot of strong snus, so I don't keep them in as long.  I can't speak much to the longevity of the flavor as I can't keep these in for too long. But, I can say that the flavor I experience is much like the original portion, but more mild.

If you're a fan of energy drinks and super strong snus, but want a white dry format, give this one a try!  If you like Lab 13 but want a stronger snus, throw a can of this on your next order and give it a go!
Posted by Chad Jones at 7:28 AM