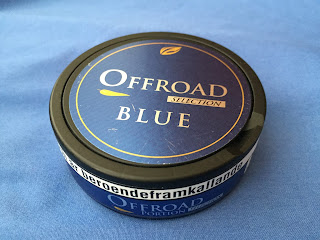 NOTE:  This product has been discontinued as of 11/2018 and is no longer for sale.

V2 Tobacco recently released Offroad Selection (Gold), a reformulated version of 2015's Offroad Gold Original Portion. Along with that product, they released another product in the Offroad Selection line - Blue. SnusBolaget describes the flavor by saying "The flavor consists mostly of juniper, which gives the snus a balanced acidity and spiciness."  I was a little nervous going into this one when I saw the name "Blue" and the flavor description of juniper.  I haven't had the best relationship in the past with products by V2 that contain either of those two attributes.  I wasn't a fan of Phantom Blue Original Portion or Thunder Blue. But I did, however, enjoy Phantom Blue White and Phantom Blue Los.  So I found myself curious to try this one, but also nervous due to my track record with V2 Tobacco's Blue products. 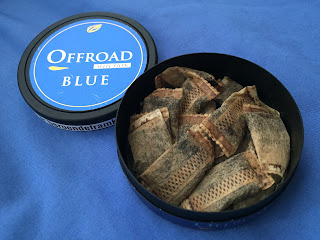 This product comes in a 12 gram can with 18 portions, meaning 0.66 gram portions. The nicotine content is 8mg/g (0.8%) or 5.33mg/portion. The portions are lighter but they don't feel too lacking in the lip. When you open the can, the aroma that comes through reminds me of Phantom Blue Original Portion. For some reason it still reminds me of Windex. It's hard to describe but it's like a mix of juniper, pepper, and light floral notes. One thing that surprised me about this one was that I get a mild cooling feeling in the lip when I put this one in. I'm not sure why, but I noticed that with each portion I used.  The taste, however, isn't too bad.  The taste is predominantly juniper with a present taste of pepper in the background.  I also notice a mild tobacco character and a light floral presence, as well.  I would say the difference between this and Phantom Blue is that I notice more pepper in the taste of this one, and I don't pick up any lemon in the flavor like I did with Phantom Blue.  The nicotine content, though it is lower than regular strength (8mg/g) still felt about regular strength.  I found the taste to last a decent amount of time, usually up to about 45 minutes.

As far as this snus goes, it's an interesting taste.  I didn't dislike it, but it's not something I would probably order again.  It's a decent tasting snus, but it's not for me.  However, if you like the juniper flavor of snus and want to save a few bucks, you can throw a can in on your next order and give it a try.  Offroad isn't an expensive brand, so if you don't like it you won't be out too much money.
Posted by Chad Jones at 8:12 AM