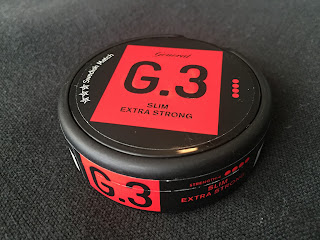 This review was originally connected to a review of General G3 Extra Strong White, but I've been trying to separate my "multi-review" reviews, so this is a new article, but contains my old review of this product.

Going into this product, there was a lot of build up. I wrote an extensive preview a few weeks back, but to basically summarize what I wrote, General 3 is the next big innovation in General Snus. First came the original General Loose in 1866. Then came the portion snus format in 1977. And now, Generation 3 (G3) by General in 2014. The main focal points was that this was to be a perfect snus - Extra Strong, Slim Fit, Long Lasting, Soft Fit, Minimal Drip. All these were results of a Norwegian focus group that pinpointed what snusers were looking for.  And from those developments came the new Generation 3 (G3) by General Snus. 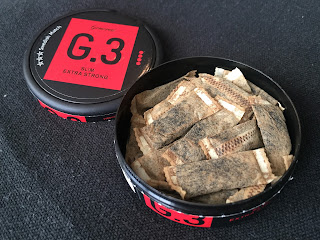 The flavor description of this one says, "Strong and spicy tobacco character with hints of bergamot and precious wood, and light tea and leather. A long, narrow, large pouch that has a slightly moist surface for a quick flavor release."   This snus is a 21.6 gram can with 24 portions, which comes to 0.9 grams per portion. The nicotine content is 2.0% or 20mg/g. That comes out to about 18mg/portion.

I was quite fond of  General Long Extra Strong before it was discontinued; it was in my rotation for about 2 years and it's a product that I know very, very well.  When it comes to this product, the aroma is a little different - whereas General ES Long was a little more mellow/subdued citrus aroma, the citrus aroma in this one is more pronounced. The taste, however, is very close. Earthy and natural tobacco flavors with the classic General flavor - a presence of citrus (bergamot), salt and pepper. The pepper in this one seems to be a touch more present than in the General Long ES. It's a little different from General Long Extra Strong in that the citrus aroma is a little more pronounced and the pepper is a touch more present in the taste - but that's about it. The portions feel the same in the lip as far as comfort goes.

If you like strong snus and the General Snus flavor, this is a must try!
Posted by Chad Jones at 6:25 AM