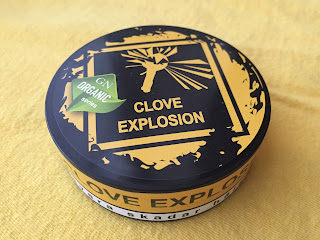 When GN Tobacco announced they were releasing Clove Explosion, I was really excited. I've always been a big fan of the taste of cloves. Back in my younger days, when I was a smoker, I really enjoyed those Djarum Black cigarettes. When I quit smoking, I noticed the clove flavor wasn't very common in the snus world. In 2009, V2 Tobacco released the Offorad Limited Edition 2009 lineup which came with Offroad Sweet Clove Snus, which I really enjoyed. Unfortunately, that one didn't live beyond the limited edition line.  Now, GN Tobacco has filled that void in the snus world with Clove Explosion. 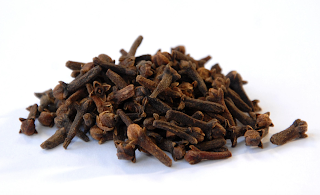 This product is released as the first in their "GN Organic" line.  The reason it is called GN Organic is because it has no added flavors. This product is a mix of 85% tobacco and 15% fresh clove from Indonesia. The flavor description of this product says, “Super strong with rich clove taste due to completely organic clovecompound in blend. The best Indonesian clove has been used to make this great product sharp straight full flavored clove bags!” This snus comes in an 18 gram can with 18 portions, meaning 1 gram portions! The nicotine content is 36mg/g (3.6%), which breaks down to 36mg/portion since it's 1 gram portions. 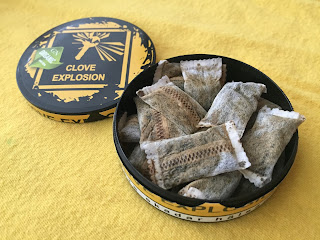 I'm a big original portion fan, so this is the version of this product line I've been most excited about. When you open the can, the aroma that comes through is predominantly clove. There is a mild sweetness, a smoky aroma, and a hint of banana. The portions are quite plump and soft and feel great in the lip. They are original portions but have a lighter moisture amount so they aren't dripping. I notice a light burn, but for some reason not as much of one as I noticed with Clove Explosion White or Clove Explosion White Dry. I notice the flavor comes on quick, but also lasts quite a while! The taste is a rich taste of clove with a light touch of sweetness and smokiness.  There is also a nice Eastern spice in the background, as well.  I pick up a mild tobacco character, as well, but it stays in the background behind the clove flavor.  The nicotine strength of this one is quite strong, it hits fast and it hits hard.  However, it isn't unbearable for someone like me who doesn't use a lot of strong portions.  I can keep it in for 30 to 45 minutes, which is pretty impressive for someone like who sticks to mostly regular strength snus.  As I mentioned, the flavor lasts quite a while; I can enjoy the full clove taste for up to 45 minutes!

This is a fantastic release and one of the best products GN Tobacco has released to date.  Though I don't use a lot of strong snus, this is something I will be throwing in to my orders from now on.  If you like clove, it is well worth a try!
Posted by Chad Jones at 11:04 AM