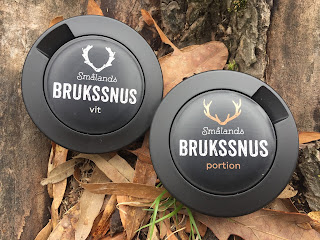 Skruf recently rebranded the Småland's Snus line with the new name Småland's Brukssnus. Usually when a company rebrands something, it's simply a new name or design, so I usually will re-buy the products and see if anything has changed. In the case of Småland's Brukssnus Los, nothing changed except the name and can design, so I updated that review with the new graphics and left it alone. However, with this one, I noticed the flavor seems to have changed so I wanted to do a new review for the new design and new flavor. I originally reviewed the old Småland's Original and White Portion products back in February of 2012. When I tried them, I noted that they weren't awful, but weren't something I'd probably order again. However, it appears now as though the taste has improved in quality!  The can design is also much better.  The look appears to be more "manly", if I had to describe it. 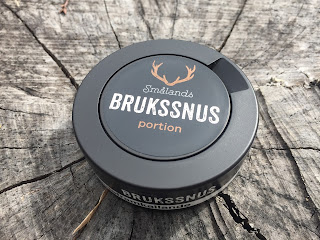 The flavor description says, “Smålands Brukssnus Portion has a pure tobacco flavor. This snus has a regular size pouch that is moist on the surface for a long-lasting flavor experience." This snus comes in a 15.2 gram can with 18 portions, or 0.84 gram portions. The nicotine content is 10mg/g or 1.0%, which breaks down to about 8.44mg/portion. 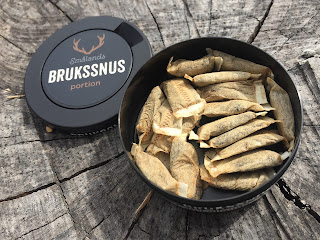 When you open the can, the aroma that comes through is a robust, slightly smoky tobacco smell.  The portions are smaller than your average snus portion, so you'll notice they don't take up as much space in the lip.  They are, however, comfortable when you put them in the lip.  They also are a little lighter in the moisture amount, which I actually like.  When original portions aren't too moist you'll notice the flavor lasts longer than your average original portion.  Though the portions aren't too moist, I noticed the flavor to still come on pretty quickly.  This is a very tobacco-centric snus in terms of taste.  The flavor comes through as an earthy, robust, well rounded tobacco flavor.  I also pick up a light floral presence in the background.  It's very faint, but I notice it hanging out in the background.  With the old Småland's Snus, I picked up citrus, however with this new Brukssnus I don't notice any.  It's purely focused on the tobacco taste.  The nicotine strength feels to be about regular strength, and I find the flavor lasts quite a while as well.  I can enjoy this snus for over an hour! 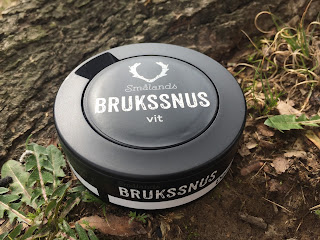 The flavor description says, “Smålands Brukssnus White has a pure tobacco flavor. This snus has a regular size pouch that is dry on the surface with moist contents." This snus comes in a 12 gram can with 20 portions, or 0.6 gram portions. The nicotine content is 10mg/g or 1.0%, which breaks down to about 6mg/portion. 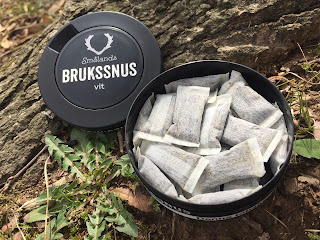 When you open a can of Småland's Brukssnus Vit, the aroma that comes through is a mild, earthy tobacco smell with just a faint hint of smokiness. I find the portions to be a little dryer than the average white portion, and the portion material to be a little less comfortable at first when inserted in the lip. However, once the portion becomes more moist it feels a little better.  This snus is, much like the original portion version, very tobacco-centric.  The flavor is more mild, however.  It takes a little while for the flavor to develop, but at about the 15 minute mark you'll notice a mild tobacco flavor that is accompanied by very faint floral notes.  They aren't too overpowering and they do compliment the tobacco taste quite well. I didn't notice any citrus in this one, either.  The nicotine strength is pretty light, only 6mg/portion, but it still feels satisfying.  The flavor on this one lasts a long time, as well!  I'm able to enjoy this snus for up to an hour and a half.

I find the new Brukssnus to be better than the older version.  The new can design is better, as is the flavor.  If you're a fan of tobacco-centric snus and want to save a few bucks, this one is definitely worth a try!
Posted by Chad Jones at 2:28 PM