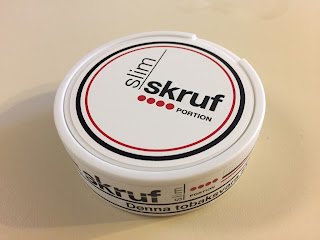 I originally reviewed Skruf Xtra Stark Slim Portion back in 2011, but haven't heard about it in many years so I assumed it was discontinued. However, I recently discovered it listed at Northerner.com and was surprised to see it was still produced. Skruf Xtra Stark Original Portion has been a favorite of mine for many years, and I order that from SnusCENTRAL.com with every order I do. However, I'm surprised no stores that ship to the US carry this! I've always said slim portions are the best way to enjoy snus, and this one is no exception! I figured since I haven't had it in 6 years, I would do a fresh review of it. The product description says, "Skruf Slim Extra Stark Portion has the characteristic skruf flavor with a distinct tobacco character and a hint of bergamot and rose oil. This snus comes in a in a slim shaped pouch for optimal fit. The pouch is moist on the surface for a long-lasting flavor experience."  Skruf Xtra Stark Slim Portion comes in a 21.6 gram can with 24 portions, which equates to 0.9 gram portions.  The nicotine content is a 4 out of 4 on the Skruf Scale of Power, which I've often estimated to be around 19mg/g.  However, for this one, it's listed at Northerner.com as having 17mg/g, which equates to about 15.3mg/portion. 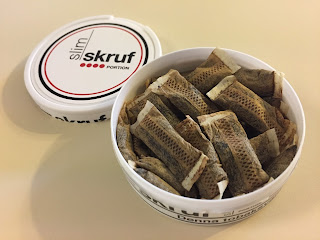 When you open the can, you'll notice the portions are slim and have a great amount of moisture to them. The aroma that greets you is a smell of citrus, accompanied by a mild tobacco presence and a touch of sweetness! Skruf is known for using rose oil in their snus which contributes a nice amount of sweetness and compliments the flavor of the snus. The portions feel great in the lip and the flavor comes on quite quickly as well. You'll taste a mild, earthy tobacco character accompanied by a taste of citrus. The flavor of rose oil is also quite present in the flavor and contributes a nice, floral sweetness to the taste of the snus. This one also packs a strong nicotine kick, so you'll definitely feel a strong, steady nicotine delivery from this snus. The flavor lasts quite a while; I find I'm able to enjoy this snus for up to an hour.

This is a really good snus.  I love Skruf Xtra Stark Original Portion, but if I could get ahold of this one from my regular snus shop, I would order it instead.  Everything about this snus is fantastic!
Posted by Chad Jones at 1:56 PM