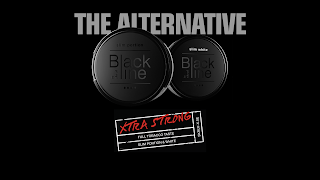 NOTE:  This product was discontinued in February, 2019.

Skruf has started off 2017 in a major way, launching a brand new product line called Skruf Blackline. I was quite excited when I heard about this product popping up in the border stores and now it seems it has made it's way to webstores such as Northerner.com and Snus24.com.  Skruf has been a favorite of mine for quite some time, making one product that is in my regular snus rotation - Skruf Xtra Stark (Original Portion).  When I heard about Skruf Blackline, I was quite excited about it. It reminded me of the launch of The Lab Series back in 2009, which was developed to be an alternative to common snus brands and products.  I get that vibe with Blackline, as well. 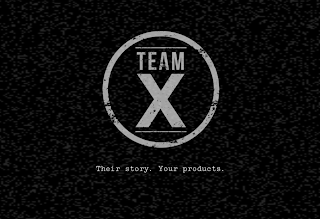 The story of the Skruf Blackline is actually quite interesting. Looking at the website for Team X, we can see a little more about how this product was developed. They were said to be rebels: “Team-X is a story about a group of Skruf workers who had a vision - doing snus their own way.”  They were said to have attitude: “An idea of moving away from rules, senior managers and their daily routine, in order to create a unique snus experience.”  They apparently worked underground: “They decided to come together during secret meetings, at hidden places.”  They wanted a revolution: “Their idea was not simply about turning white cans into black cans. It was more of a strong desire and a bold belief, to make a momentous change.”  To them, the project was about craftsmanship: “It was a rebellious touch with a different mindset to create an alternative of what they thought real craftsmanship is all about.”  They describe the Black Line as being extra strong, with “full tobacco taste” and having two formats: slim original portion and slim white portion. 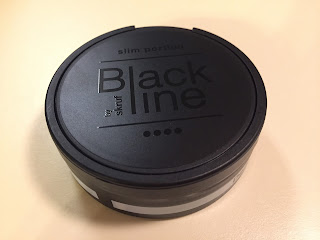 The flavor description says, "Black Line Slim Portion by Skruf has a full tobacco taste. This snus comes in a in a slim shaped pouch for optimal fit. The pouch is moist on the surface for a long-lasting flavor experience."

This is a 21.6 gram can with 24 portions, which comes to 0.9 gram portions.  The nicotine strength is 4 out of 4 on the Skruf Scale of Power, which I've estimated in the past to be around 19mg/g. 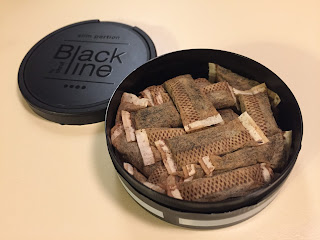 When you open the can, you'll notice the portions are slim original portions and have a pretty decent amount of moisture to them.  The aroma is a robust tobacco smell with a hint of sweetness.  It reminds me of the smell you get from regular Skruf due to the presence of rose oil.  The portion material is soft and these feel quite nice in the lip.  Going into this one, I didn't know what to expect from the flavor, but I was pretty pleasantly surprised by the taste!  If you've ever had Skruf, it reminds me a lot of that taste, but without the citrus.  The tobacco flavor is rich and robust with hints of wood.  I also detect a sweetness which reminds me of the rose oil used in regular Skruf Snus.  It's a very natural tasting snus.  The tobacco taste is really present in this snus and is enhanced by the wooden notes and the sweetness from what I'm assuming is rose oil.  The nicotine kick is solid, it feels like an extra strong snus.  The flavor also lasts quite a while; I've been able to keep these in for up to 45 minutes. 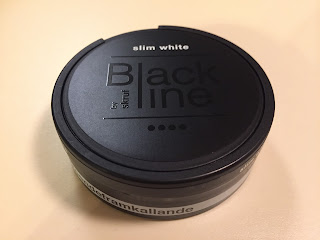 The flavor description says, "Black Line Slim White Portion by Skruf has a full tobacco taste. This snus comes in a in a slim shaped pouch for optimal fit. The pouch is dry on the surface with a moist contents."

This is a 16.8 gram can with 24 portions, which comes to 0.7 gram portions.  The nicotine strength is 4 out of 4 on the Skruf Scale of Power, which I've estimated in the past to be around 19mg/g. 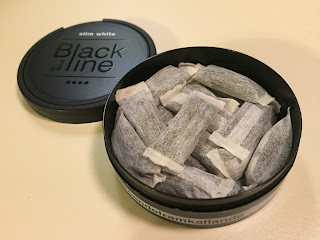 When it comes to this one, I notice the white portions to be a little dryer than other Skruf white portions I've had in the past.  The portion material is still pretty soft to the touch, however. The aroma that greets you when you open the can is a milder tobacco smell with a very light touch of sweetness in the background.  The flavor is milder than I noticed with the original portion, but still retains many of the qualities I noticed in that flavor profile.  You're greeted with a mild, well rounded tobacco taste.  The longer you have the portion in, the more present the tobacco taste becomes.  I don't notice as much of the wooden notes until about the 20 minute mark, however.  They are there, but not as present.  The sweetness, from what I'm assuming is rose oil, comes through in a gentle way and compliments the milder tobacco taste quite well.  This one lasts quite a while; I've been able to keep these portions in for up to an hour and a half, which is quite impressive.  The nicotine strength feels to be strong, but it doesn't quite kick me like the original portion does.

If you like tobacco centric snus products such as Grov, or complex/natural tasting products like Lab 06, this is a must try. It takes tobacco centric snus, adds the sweetness that we know and love, and is made with the craftsmanship that Skruf showcases in their products. This is definitely something I would order again!
Posted by Chad Jones at 6:53 AM