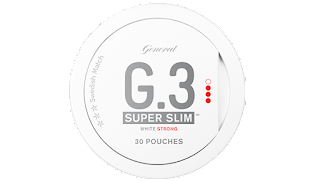 Swedish Match has now released a full description of this product:


"OUR SLIMMEST SNUS POUCH – NOW WITH A NEUTRAL FLAVOR

In the summer of 2016 we launched G.3 SUPER SLIM – with thinner pouches than any other available snus, but with a nicotine delivery equivalent to a pouch in our SLIM FORMAT. Thanks to its format, there is room for 30 pouches in the can. G.3 Super Slim was originally released in the Blue Mint flavor, and now it is followed by another, more neutral tobacco flavor. The new snus is simply called G.3 SUPER SLIM White Strong."

I must admit, I'm really excited by the phrase "neutral tobacco flavor".  This could be fantastic! 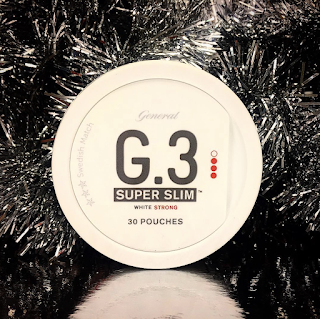 You may remember last year I reviewed General G3 Mint Super Slim Strong, and interesting release from Swedish Match with very, very slim portions. Today I discovered a photo via our friends @Snusers on Instagram of a new product set to release from Swedish Match:  General G3 Super Slim White Strong.  This looks as though it's going to be the regular General taste but in the super slim format.

As of now, I'm not sure of any information about a release date on this one, but I do look forward to trying it!
Posted by Chad Jones at 8:18 AM