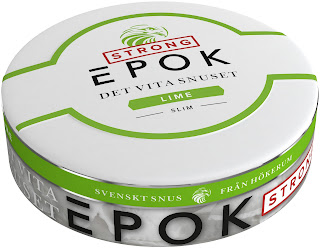 Since launching in 2015, the Epok line has been growing more and more popular. They originally launched in regular strength format, however last summer they launched their first strong product - Epok Ice Cool Mint Strong. Now, they're preparing to launch a strong version of Epok Lime.  I enjoyed the lime flavor of that one, and I look forward to seeing it released in the strong format.  In the past 8 years, other than GN Tobacco I can't recall anyone releasing a strong snus with a flavor of lime.  So, I'm looking forward to reviewing this one!
Posted by Chad Jones at 12:01 PM