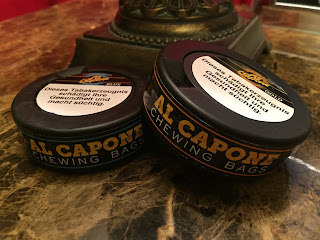 Back in March 2015 I reviewed Al Capone Mint and Al Capone Vanilla (Chewing Tobacco). These were a los type tobacco, made by V2 and sold in places where snus is illegal, but chewing tobacco is. Al Capone is made by V2 Tobacco and distributed by various stores. I got these from a friend in Europe, so a special thank you to Mario for finding these for us. If you're interested in them, I've also seen them for sale on SnuffStore.de, where they sell a lot of "chewing tobacco"/snus products.  Due to the EU snus ban, people don't have easy access to safer tobacco alternatives.  However, manufacturers have recently been making products in the same way that they make snus, but labeling them as "chewing tobacco" so that they're legal to be sold within the EU.  So, what's the difference? 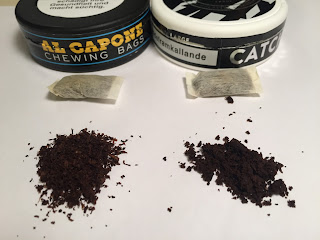 Well, not much.  This is a comparison between Al Capone Chewing Bags and Catch Licorice White Portion Snus.  You can click on the photo to view it up close.  The cans are the same size, obviously.  The portions look similar, but the Al Capone "chewing bags" feel to be a little bigger. You can tell that they obviously contain more tobacco.  The tobacco inside the pouches is pretty similar, but the snus seems to be a little more moist and more finely ground.  But there really isn't much difference in these products, honestly.  Isn't it crazy how the EU works?  All you have to do is change the name on a product and it suddenly becomes legal.

The SnuffStore website describes the use of chewing bags as follows: "The Al Capone Chewing Bags are smoke-free, cut tobacco in portion bags. The specially developed paper of the bags allows an optimal delivery of taste and nicotine. For use, a Chewing Bag is pushed into the back of the bag and can be kept in the mouth as long as you want. For a faster nicotine and taste development, the bag is easily chewed. The Al Capone Chewing Bags have a high nicotine content. If you feel too much effect, please remove the Chewing Bag quickly from the mouth." 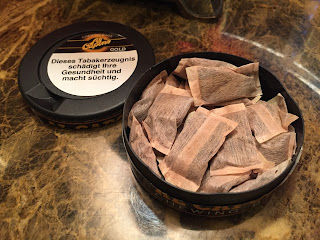 Now, this one I was excited about. One of the first snus products I tried back in 2009 was Catch Collection Mint Vanilla - and I loved it! So, reading vanilla and menthol in this flavor profile had me quite excited.  Upon opening the can, I was surprised to see the portions have a beige-ish/brown-ish color. If you remember my review of Oden's Vanilla Extreme White Dry, those products had a pinkish type color due to the vanilla oil used, which may be the case with this one.  The pouches themselves are quite soft, as is the tobacco inside.  The aroma is an interesting mix of menthol and vanilla.  Both aroma presences seem to be equally balanced.  When I put a pouch in the lip I noticed there to be a mild cooling presence, but not as strong as I usually experience with most mint snus products.  The flavor of vanilla is certainly present, and it comes through in a mild and natural way.  The menthol tastes is rather mild and in the background and I would say it contributes more to the cooling sensation in the lip than the actual flavor.  You can taste it in the background, but it is very faint and light.  So it's not too much like Catch Mint Vanilla which blended those two flavors, but that's not saying it isn't good - this snus has a fantastic taste!  The longer you have the snus in the more you notice those caramel notes in the background which compliment the vanilla quite well.  As far as the nicotine goes, I'm not sure of the strength but it feels to be regular strength.  I'm assuming it's anywhere between 8mg/g and 12mg/g.  But, as far as taste goes, this one is fantastic.  I really dig it. 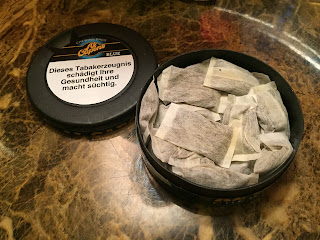 These portions are the regular color.  I found the portion material for these to be soft, as well as the tobacco inside the pouch, much like the Vanilla chewing bags.  When you open the can, the aroma that comes through is more menthol than peppermint.  The peppermint smell is detectable, but it's in the background and not as sharp as I usually experience with snus with peppermint in the flavor profile.  There is an immediate cooling sensation when you put the pouch in, but it's not as strong or present as I experience with most mint/menthol snus products.  It is pleasant, however.  The sweetness in the flavor comes on pretty quickly.  I notice the peppermint more in the taste than I did in the aroma, but the presence of menthol seems to be balanced pretty equally with the taste of peppermint.  It's an interesting flavor experience.  The nicotine strength feels to be about regular strength.  Much like with Al Capone Gold, I'm assuming it's between 8mg/g and 12mg/g, at least that's what it feels like.  The taste is decent.  It's nothing remarkable by any means, but if you're somewhere that can't get snus, these would certainly do the trick for those who like the mint flavor!

Of the two, the Gold is definitely my favorite.  If that flavor were put into a snus, I'd absolutely buy it again.  But the two are both solid releases, and I'd suggest trying both if you're somewhere that can't get snus, but can get these products.
Posted by Chad Jones at 3:31 PM