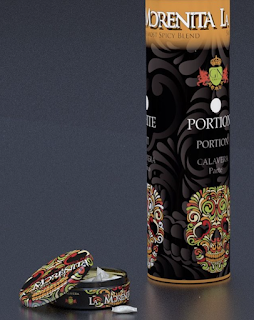 It appears as though we not know what La Morenita (Rum Snus) from GN Tobacco will look like.  This photo shows the packaging a roll will come in and a look at the can design, which appears to be metal.  The wrapping says (from what I can tell) "Most Spicy Blend".  Calavera is Spanish for skull, and Parte is Spanish for skull.  So I'm not quite sure what that means at this point.

A side note, and I'm not sure if GNT meant this, but La Morenita is another name for the Virgin Mary or Our Lady of Guadalupe from the Catholic Faith.  I'm not sure if that's what GNT is going for, but as a Catholic myself I find that to be interesting!

For those just tuning in, I've been following the production of this snus since 2014. One of my all time favorite snus products was Kardus 2009, which was a rum snus developed by Conny Andersson.  When Conny moved on from Swedish Match to GN Tobacco he began working on La Morenita.  When I talked to him back in 2014, he told me this snus would be "rum based using Zacapa Rum and flavored with hints of dark chocolate from the Caribbean. This snus will pair black sweet San Andres maduro tobacco from Mexico with Ometepe tobacco from Nicaragua, which has a strong taste of nectar. This one is also barrel aged in barrels from Nicaragua. For the can, one of Sweden’s top and most talented tattoo artists is designing the can graphics." Conny describes it as a "...sensual, smart,...... product."  After that, I heard in late 2015 that it was still coming and would be released in original portion, white portion and los.  I was told then that it would be released in early 2016.  Now, from what I've heard from Moe Unz at SnusCENTRAL.com, the release date has moved to early 2017. 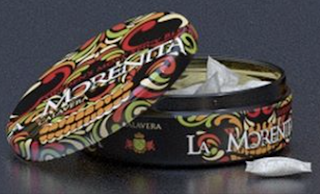 Conny Andersson is no longer with GN Tobacco, but I'm hoping that this product will be just as good as he originally intended for it to be.  I'm certainly hoping that the flavor of Kardus 2009 lives on in this new snus from GNT!  With a can design like this one, I'm hopeful the snus inside is just as awesome as the design is!
Posted by Chad Jones at 5:22 PM