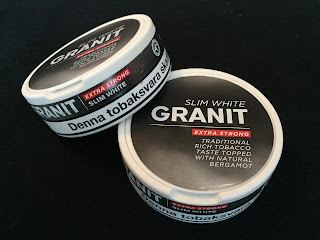 NOTE:  This product has been discontinued/rebranded, and is now for sale as Granit X-Intense White Slim.  Check out the new review - here!

I recently noticed a new Granit product for sale on TopSnus.com, Granit Slim White Extra Strong. Luckily, I have a friend in Europe who will get these products for me and ship them over, so a special thank you to him.  A couple of things I want to touch on first about this product: the design and the portion.  First, Granit is doing a redesign on their products and I really like the way the new cans look.  Next, this is the first slim portion to hit Granit's regular/traditional flavored snus line. They branched into slim portions with Granit Sensations (Mint) Slim White and Granit Sensations (Lakrits) Slim White in May of this year.  It's always exciting to see companies changing things up!  Now, when it comes to this snus, the product description says, "Granit slim white extra strong have a pure and clear taste of tobacco - and hints of bergamot and peppery. White slim portion type with higher nicotine for the nice nicotin kick."  This snus comes in at 16mg/g of nicotine. 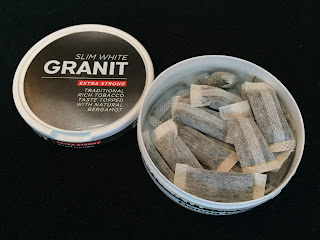 I was a little bummed when I opened the can to see that the Granit line hasn't got the FlexLid that we're seeing with the Lundgren's line.  Hopefully someday they'll bring it to the Granit line.  When you open the can you're greeted with the aroma of tobacco, a present peppery smell and a presence of citrus.  The slim white portions are quite comfortable in the lip, as well!  The flavor profile seems to be a balance between mild tobacco character and mild citrus flavor.  There's also a hint of pepper in the background.  I also notice that this snus is a little saltier than the average snus, but they may be due to the fact that salmiak is listed as an ingredient on the bottom of the can.  As far as the nicotine content goes, it is 16mg/g.  Though it is called "extra strong", this snus doesn't quite feel as strong as an extra strong. I do notice a nice nicotine kick from it, but it doesn't feel as strong as an extra strong from Swedish Match or V2 Tobacco might.

As far as budget snus goes, Granit is pretty solid.  It's not going to be as expensive as General - it's less than $3.00 USD per can.  Though it is a cheaper snus, it's a pretty decent tasting snus.  So if you're looking to save a few bucks, this might be a good one to try!
Posted by Chad Jones at 6:01 PM