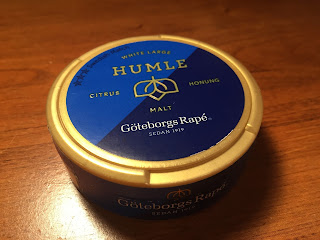 The idea of making snus that is flavored with, or pairs well with, beer is relatively new. No one has been more on the forefront of this than Conny Andersson. In 2015, he released Mellgren's IPA Snus and in 2016 he released Hop(e) and Glory IPA Snus which was a much better version of his Mellgren's IPA creation. Now, Swedish Match has decided they want to release a beer inspired snus and have brought for this creation with a partnership with Fjäderholmarna's Brewery, who they said were their "inspirators and our sounding board". Swedish Match describes this snus as follows: "Much like snus, beer is a product with few ingredients which, if handled correctly, can provide a great variety in taste and experience. Sweden has in recent years made a name for itself in the international craft beer community, mainly for its microbreweries – where high quality, flavorful beer is brewed in small batches and with attention to craftsmanship. This has made a great impression on us at Swedish Match. When we developed Göteborgs Rapé Humle, we chose to contact the people behind microbrewery Fjäderholmarna´s Brewery – who became our inspirators and our sounding board. Taste-wise, Göteborgs Rapé Humle is the first Swedish Match snus ever where we used bitterness in the flavor palette. We balance it with notes of citrus, malt and a bit of honey. The result is a flavorful snus, that doesn’t remind of any other of Swedish Match’s snus varieties."

Before we get into the review, I do want to remark on the can.  I absolutely love the design, it is very beautiful! 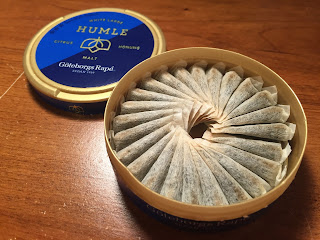 This is a snus I have been very interested to try. It blends two of my favorite things: beer and snus. And as someone who regularly uses Göteborgs Rapé, I was very interested in trying this one.  Going into this one, I wanted to test it in two ways.  First, as a standalone snus without beer.  One thing I love about Hop(e) and Glory is that I can use it all the time, even if I'm not drinking, because it has a great standalone flavor.  And second, I wanted to test this one with beer to see if the flavor is better or more enhanced when a beer is brought into the equation.

Opening up a can of GR Humle, you'll notice the beautiful Swedish Match star formation.  One thing I noticed about this one, however, is that the white portions are very, very soft. They remind me a lot of General Tailored White and the old 2013 edition of Goteborg's Rape White (Slim Can), both of which had the Natufibe pouches and were extremely soft.  I'm not sure if they used a different portion material for this one, but I do find it to be very soft.  When you open the can, the aroma of honey is very present.  There is a very light touch of citrus in the smell, as well.  There definitely is a beer-like presence in the aroma.  I don't notice much else in the aroma, however.  The taste takes a little while to develop but begins with honey, which lingers for quite some time.  The flavor definitely has a beer taste to it, it is more reminiscent of a pale ale and is accompanied by some bitterness.  I don't notice as much of the herbal/floral notes in this one like I do in the standard Göteborgs Rapé.  As far as a standalone snus, I don't feel like this has enough going on that I would want to use it on its own like I do with Hop(e) and Glory IPA Snus. 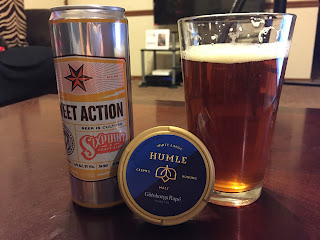 For this snus, I decided to pair it with a regular pale ale and not an IPA. The reason for that being that I notice more of an ale presence to this snus than an IPA, so I decided I would pair it with a new ale that I haven't tried before - Sixpoint Sweet Action.  I can say that this snus tastes better with a beer than buy itself.  The citrus and honey notes of the snus work really well with the bitterness of the beer.  The flavors play really well off of each other.  So this isn't a snus that I would use as a standalone snus, but I find it works much better when it's actually paired with a beer.

If you're in the US, unfortunately we don't have access to this.  Snus24 had some for sale for a while, but it went pretty quickly.  I'm not sure if there is anymore left in stock anywhere, but if you're in Sweden you still may be able to find this at a 7-Eleven or a Swedish Match store.  However, even if I could buy this snus online in the US, I think I'll just stick with Hop(e) and Glory, I like it much more.
Posted by Chad Jones at 3:17 PM