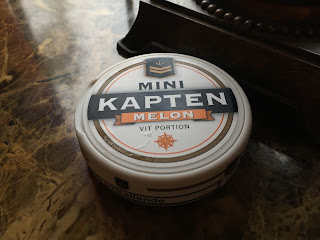 Earlier this year I reviewed Kapten Melon Extra Stark Vit by AG Snus. Now, AG Snus has released another variant of this flavor, this time in a white mini portion! The melon flavor is quickly becoming one of the more popular flavors on the Swedish Snus market and over the past several years we've seen more and more manufacturers releasing melon snus. TopSnus.com describes this product as having "a pronunced sweet flavor of fresh melon on a foundation of traditional snus taste."  If you love melon snus and want a mini white portion, this may become your new favorite snus! 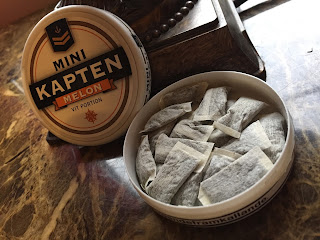 When you open the can, the aroma that comes out is a mild, fresh smell of honeydew with a touch of cantaloupe in the background. The white mini portions are quite soft and feel great in the lip! I don't use a lot of mini portions, so when I personally use or review a mini portion I usually just double up on them. But that's my personal preference, everyone is different! The taste is as good as the aroma. It reminds me a lot of a Canary Melon, which is like a more tangy honeydew. I also notice light hints of cantaloupe in the background. The flavor of the snus itself is mild, fresh, and not too sweet - which I like! In a fruit snus, the tendency could be to make it too sweet, or too artificial tasting, but AG Snus has done a great job delivering the taste of melon in a mini sized snus. When I have two pouches in, I feel about the same kick of nicotine as a regular strength snus, so if you're someone who enjoys mini snus, I imagine you'll be quite satisfied with the nicotine delivery. The flavor lasts over an hour which is impressive!

If you're a fan of melon flavored snus and want something in a white mini portion, give this one a try!  I've only seen it sold at TopSnus.com, so if you're an EU snus fan you can grab a can from there.
Posted by Chad Jones at 2:26 PM