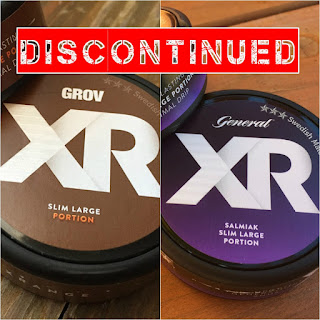 Our friend Larry at SnusCENTRAL posted an article today about two products being discontinued by Swedish Match. One is Grov XRANGE Slim Original. This one caught me off guard. For years, snusers have been asking for a slim version of Grov. But, I'm assuming sales weren't there and Swedish Match is pulling the plug early. The other one is a personal favorite of mine, General XRANGE Salmiak Slim Original. Swedish Match has a bad habit of introducing good licorice snus and then dropping it from their product line. General Licorice was one that I really liked, but they discontinued that one, too. I think the moral of the story is don't get attached to Swedish Match licorice snus - because you never know when they could dissapear! Nick and Johnny Small Batch Licorice was another good one that was discontinued.

I'm not sure when these are being discontinued or when production stopped, so if you enjoy these it would be wise to stock up now before they're gone forever!
Posted by Chad Jones at 4:26 PM