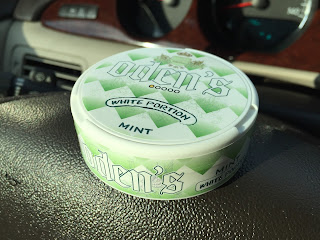 Every now and then, a new snus pops up by surprise. This is one of those cases. I heard that GN Tobacco was releasing Oden's Lemon (White Portion) as well as Lenny (Stark White Portion), but had no idea about this one. Coincidentally, it popped up the day before I did my recent SnusCENTRAL.com order, so I threw a can in for this review. The flavor description says, "Oden's Mint White Portion Snus uses mint crystals and a touch of Xylitol for sweetness in making this tasty mint portion snus."  I'm not expert in Xylitol, but I'll share what WebMD says about Xylitol. Xylitol is naturally occurring and used as a sugar substitute. Xylitol is also said to prevent tooth decay and can act against some bacterias that cause infections.  So, using xylitol seems to be preferable to using other sweeteners in snus. 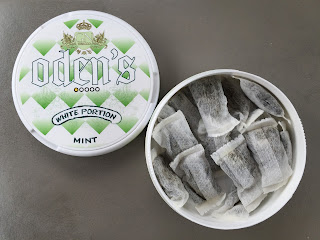 The can is a 15 gram can, and I counted 13 portions in this particular can.  This snus is a white portion, which is something new GN Tobacco is doing. In the past, they primarily focused on the white dry format, but have been releasing more white portions lately. When you open the can, the aroma that comes through is very sharp. There's a very present mentholated aroma which comes through much like opening a fresh bag of menthol cough drops. The white portions are also quite soft to the touch! The tobacco seems to be quite concentrated and lumped together in one side of the portion, so I do suggest fluffing these.  When you put a portion in your lip, there's a strong burn and and a very bold cooling sensation that you feel in your lip and throughout your mouth.  It reminds me a lot of the experience you feel with Siberia (White Dry) Extremely Strong from GN Tobacco. I would say the sensations you feel in your lip are more bold than the flavor, however. There is a very light sweetness, a very light mint flavor and a faint touch of menthol. The mint comes through as more of a natural mint taste than peppermint or spearmint. It's very interesting, because the feel in the lip is very strong, but the flavor is very mild.

This is a snus that I find myself torn on.  I enjoy the sensations I feel in the lip - the burn, the cooling sensation - but the flavor seems to be a little too mild.  So, it's probably not something I would order again, personally.  But if you're into a nice burn/cooling presence in the lip and want a milder flavored mint snus, this would be one to check out.
Posted by Chad Jones at 5:24 PM