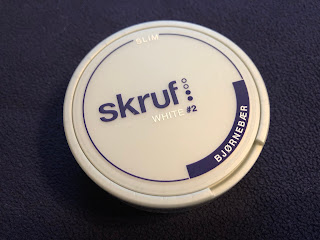 NOTE:  This product has been discontinued and replaced with a Super White version.  New review, here.

It's been a few years since I've had this one, but the Skruf line has. recently gone through a redesign so I figured I'd revisit this product.  This snus originally launched back in June of 2016, and it's proven popular, as it's now been on the market almost 3 years.  One thing to note, the can design has now dropped "Fresh" from the name, as it used to be called Skruf Slim Fresh Bjørnebær.  However, this doesn't mean the flavor has changed; it still retains that mix of blackberry and mint.  The flavor description says, "Skruf Slim Fresh Björnbär White Portion Snus is a regular strength slim portion snus flavored with blackberry and mint."  I can't find a nicotine strength listed anywhere, but it's 2/4 on the Skruf Scale of Power, which means it's regular strength.  I'd place it between 8mg/g-10mg/g.  It comes in a 16.8g can with 24 portions for 0.7g portions.

Oh, and to throw this out there, Bjørnebær means blackberry.  It's also a fun word to try to pronounce. 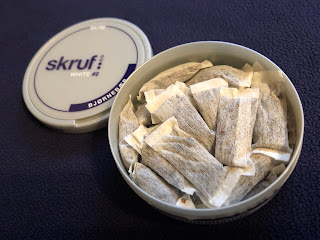 When you open the can, the aroma that comes through is a mild, natural smell of blackberry with a touch of menthol.  It's not overly sweet, either.  The portions are slim, and a little dryer to the touch than your standard white portion.  When you put a portion in the lip you'll encounter a mild cooling presence.  The flavor is predominantly that gentle blackberry flavor which comes through in a natural, mild way.  The mint flavor is more of a menthol, which adds a freshness and a cooling presence to the flavor.  There also seems to be a light herbal character in the background.  The flavor lasts a pretty good amount of time; I found on average I can keep these in for up to an hour.  The nicotine strength feels to be about regular strength, as well.

It's interesting to note how tastes change.  Traditionally, I haven't been a fan of mixing mint/menthol with other flavors.  In fact, when I first reviewed this one, I didn't really dig it.  However, a few months back I reviewed Skruf Cassice (Black Currant), which blended menthol and black currant, and that became a favorite of mine.  Upon revisiting this one, I actually found the flavor to be more enjoyable.  It's different, but it's enjoyable.  While this isn't something I would use full time, I can say I enjoyed it more this time than last time, and I'd probably buy it again.
Posted by Chad Jones at 11:31 AM