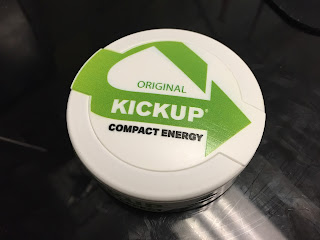 Over the past several years, I've had a lot of people ask me to write about nicotine free/tobacco free snus. Granted, these aren't products I use very often, however I felt that I should write about them as they do serve a purpose. For one, there are people who do try to quit snus, but still want to feel a pouch in their lip. For me personally, I use these from time to time at night before bed. If I want to go to sleep and not have any nicotine in my system but still feel a pouch in my lip, I'll throw one of these in. The product description for this product says, "Traditional snus character, with hints of bergamot and licorice, as well as mild nuances of ripe fruits." 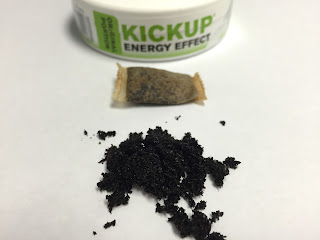 In case you're curious, this is what's inside the pouch. Winnington describes the innards as containing "black tea, vitamins, minerals, ginseng and guarani."

Honestly, when you open the pouch, the mixture inside doesn't look that far removed from snus tobacco.  Granted, it isn't the same thing, but the look isn't too different when compared to Swedish Snus. 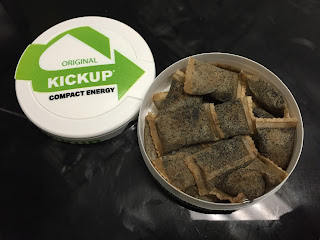 When you open the can you'll notice a really peppery smell accompanied by a light sweetness and a little citrus. The pouches are quite plump and feel about the same in the lip as a regular snus portion does. The taste is surprisingly interesting. There is a very predominant taste of pepper that greets you, along with a light taste of tea, a little citrus and a slight herbal taste in the background. I don't notice any licorice or fruit flavors, it's mostly tea, citrus and pepper. Honestly, if this flavor existed in a regular snus with tobacco, I would probably use it. It's quite tasty.   Now, as far as the energy kick goes, I do notice a little "kick", but it doesn't feel like a nicotine kick and it doesn't seem to last as long as a nicotine kick does.  It's hard to explain, but the ingredients to this deliver differently than nicotine does.

If you're into tobacco and nicotine free products, I'd suggest trying these out.  It has a really nice, unique flavor.  A great aroma, comfortable pouches and a pretty neat looking can!
Posted by Chad Jones at 12:02 PM