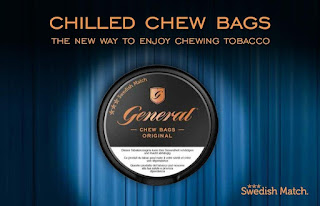 Back in March, I previewed the new General Chew Bags that Swedish Match launched in Switzerland. They launched 4 flavors: Original, Original Strong, White Mint and White Mint Strong. From what I've been told by Swedish Match, there aren't any plans to sell these products outside Switzerland. They have signed a contract with Valora, which will sell the product in their stores. Swedish Match says this product consists of cut tobacco packaged in small portion bags. You use the product by chewing it three to four times and then place it under your lip. The paper used for chew bags is also said to be different. They apparently are using paper with a “high grammage” that provides a stronger bag designed to be chewed to release flavor and nicotine. So, when I first heard this product, I wasn't too sure what to expect. Thankfully, a friend of mine sent me some of these new products that he obtained from YourSnus.ch, so if you want to try them and you're in an area they ship to, that's where you can get them from. 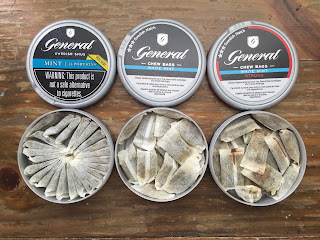 Before we get into he reviews, I wanted to do a comparison of these products and regular General Snus.  The General Chew Bag can designs aren't too much different from the General Snus can design.  The General Snus pouches come in the star formation, however, the chew bags do not come in the star formation.  It's also interesting to note that the Extra Strong Mint Chew Bags appear to be a little more moist than the regular white portion General Snus.  The Chew Bag can weighs in at 18 grams, compared to the Swedish Snus can which weighs in at 24 grams.  The pouches feel about the same to the touch, and I didn't notice the pouch material to feel any thicker than regular Swedish Snus. 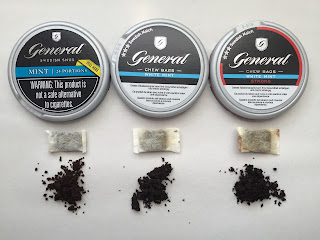 I also want to open the pouches up so we can do a comparison of the tobacco itself in General Snus and General Chew Bags. If you want to get a close up view, click the image to the left and you can get a better look at it. Honestly, I didn't notice much of a difference. The Chew Bag tobacco appears to be a little more moist, but it doesn't appear to be that much different. If I had to narrow down a difference, I could say the snus is a little more clumpy, but honestly, there isn't much of a different to speak of. 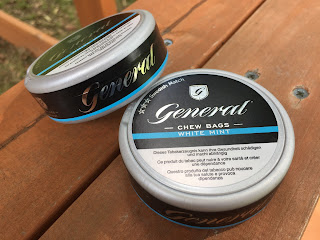 General Chew Bags: White Mint
When it comes to General Chew Bags: White Mint, the product description says, "A soft tobacco flavor with notes of mint. The chewing tobacco in the pouch is made ​​from carefully selected tobacco leaves from India and Guatemala.   The tobacco is first cut, air-dried and then reconstituted with water, salt, additives and flavorings. Processing according to strict rules of the tobacco and food regulations performed (standard according to national food authority Sweden and Swiss tobacco and food safety rules).   Swedish Match has the highest standards and uses only the best tobacco for the production of General Chewing Bags. In order for the General arrives always fresh at your home it is always stored in our refrigerator. Nicotine: 11mg.  Bag Color: White." 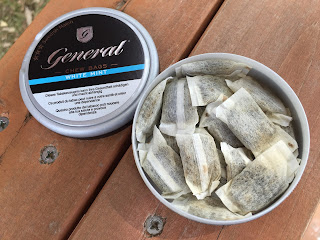 Going into this one, I was curious how it would compare to General Mint (White Large) Swedish Snus. However, this one appears to be a little different when I compare the two.  When you put the pouch in your lip you'll notice a nice little tingling sensation that comes on.  The aroma of this one is a straightforward, sharp peppermint smell.  It doesn't seem to have that mellow, smooth/natural mint smell that I notice in General Mint.  The taste is a natural peppermint taste.  It's not overly sweet and doesn't seem to have that natural mint flavor that I notice in General Mint.  Even though the two don't taste the same, this one still has a great flavor.  It's a really nice, natural, mellow peppermint flavor.  Though the nicotine content is said to be 11mg/g, it honestly feels more like regular strength 8mg/g Swedish Snus in terms of nicotine delivery.  Also, I didn't chew on these pouches.  I just put them in my upper lip and used them like snus and the flavor delivery seemed to be the exact same as Swedish Snus. 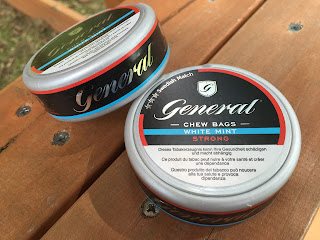 General Chew Bags: White Mint Strong
When it comes to General Chew Bags: White Mint Strong, the product description says, "Stronger version of White Mint. The chewing tobacco in the pouch is made ​​from carefully selected tobacco leaves from India and Guatemala. The tobacco is first cut, air-dried and then reconstituted with water, salt, additives and flavorings. Processing according to strict rules of the tobacco and food regulations performed (standard according to national food authority Sweden and Swiss tobacco and food safety rules). Swedish Match has the highest standards and uses only the best tobacco for the production of General Chewing Bags. In order for the General arrives always fresh at your home it is always stored in our refrigerator. Nicotine: 14mg. Bag Color: White". 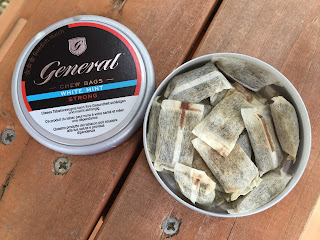 When you open the can, the aroma that comes through is a predominant, sharp peppermint smell.  Comparing this one to General Mint Swedish Snus, I didn't notice the smooth/mellow natural mint smell that I notice with that one.  You'll notice a mild tingling sensation that comes on when you put a portion in your lip.  The flavor of this one is pretty much identical to the regular strength General Chew Bags: White Mint.  A natural peppermint flavor comes through that isn't too overly sweet, but rather mellow and refreshing.  The flavor is pretty natural and mellow, but predominantly peppermint.  I don't notice any of the sweet, natural mint taste that I pick up with General Mint White Portion snus.  That being said, it's still a very tasty snus if you dig peppermint.  This one is listed at 14mg/g of nicotine, and I do notice it to be a little stronger than the regular strength White Mint, but it's not too strong.  It's not going to knock you out or anything.

Both of these products are great.  If you're in the EU and you're somewhere that can't get snus, I'd suggest trying them both out.  If you dig peppermint, they both deliver a very nice, refreshing peppermint flavor. If you want to order them online, check out YourSnus.ch, they stock these and the original flavor General Chew Bags, as well!
Posted by Chad Jones at 2:44 PM