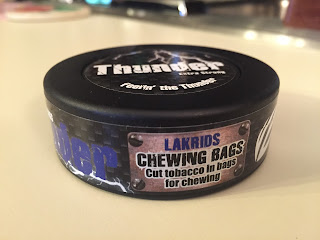 Over the past few years, the "Chewing Bag"/"Chewing Tobacco" category has been growing a lot. V2 Tobacco has Thunder Chew Bags, AG Snus has Ink Chew Bags, Gotlandssnus has Cruiser Chew Bags, GN Tobacco has Islay Whisky Chewing Bags and Swedish Match has recently launched General Chew Bags.  With the EU Snus Ban, this is a way that people can get ahold of harm reduced tobacco products legally.  But the word "chew" may turn people off and leave many people asking the question, "What's the difference between snus and chewing tobacco/chew bags?" 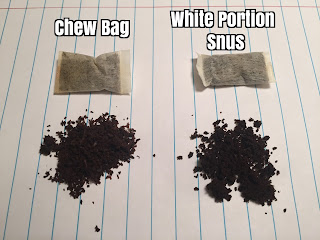 Looking at this photo, you can tell there is virtually no difference.  Swedish Chewing Tobacco and Swedish Snus are made the same way.  The pouches look the same.  The tobacco inside the pouches looks the same.  The cans look the same.  The nicotine delivery is the same.  They're basically the exact same product but with a different name.  And as strange as it sounds, this makes the product legal in the EU.  I'm glad that more and more companies are doing this because it allows these harm reduced tobacco products to be easily accessible to people in the EU who may be looking for a way to quit smoking. 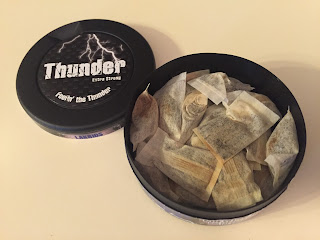 Now let's talk about the flavor! If you've ever had Offroad Lakrits White Portion before, this product reminds me a lot of that one. Honestly, of all the licorice products on the market, V2 makes a really good one.  The aroma is a mellow, gentle licorice smell.  The portions feel the same in the lip as you would expect from a white portion.  The flavor and the nicotine release about as slowly as you would experience with a white portion snus product.  The flavor is a gentle and mild black licorice taste with just a little salt balance in the background.  I don't notice any pepper or tobacco flavor; it's mostly a straight forward licorice flavor.  If you're a fan of licorice, I'd suggest trying these out.  They're pretty good and it's the same thing as snus, but in an EU-friendly product!

A friend of mine got these from Northerner.com and sent me a can, so thanks for hooking us up.  If you want to try them, you can grab some from them!
Posted by Chad Jones at 5:09 PM