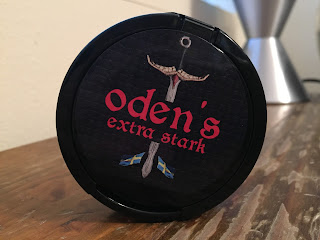 The flavor description says, "Oden's Extra Strong Portion is a snus with a relatively unique taste. It is unique in that it is one of the few varieties that are flavored with pure tobacco . The tobacco which has been selected in Oden's has naturally earthy undertones and a slight sweetness. With an added saltiness, traditional Swedish tobacco snus." 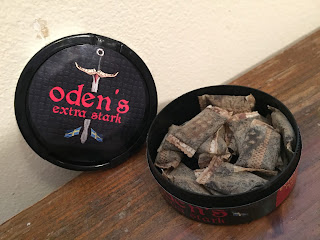 Oden's Extra Stark Portion has 17mg/g of nicotine.  If I had to compare this snus to another product, it's closest to Oden's Original, not Oden's Extreme - though I can detect presences of each snus in this product. The smell of citrus is present, but there is an equal presence of earthy tobacco with a slight hint of pepper. The flavor is great - a pairing of spicy, earthy tobacco with the classic Swedish taste of citrus/bergamot. With most "traditional" snuses that are flavored with bergamot, that is the only taste you get, and the tobacco flavor isn't as noticeable. With this one, it's the best of both worlds. You can experience the classic Swedish snus flavor, but also can enjoy the taste of tobacco as well, mixed equally with that citrus flavor. It's very good stuff!
Posted by Chad Jones at 2:44 PM