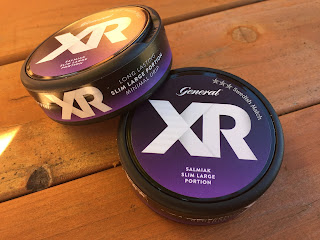 I've been really excited about this product ever since I first heard about it months ago. I was a big General Licorice fan, and was really bummed that it was discontinued. When I first heard about this product I was hoping that it would be a rebranded replacement of General Licorice. Unfortunately, that wasn't the case. Though this snus has a different flavor from what I hoped it would, that doesn't mean I didn't like it. 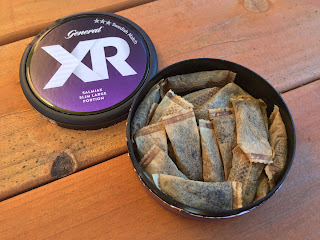 When you open the can, the aroma of slightly sweet licorice comes through. It reminds me a lot of Oden's Lakrits, another favorite of mine. The portions are long, slim and very comfortable in the lip.  Though the taste wasn't the General Licorice replacement I was hoping for, I did find this snus to be quite tasty.  There's a mild, sweet licorice flavor that comes through, again, reminding me of Oden's Lakrits.  The snus is also saltier than your average snus, due to the presence of salmiak.  I didn't notice much tobacco flavor, it's a predominantly licorice flavor.  The flavor is a great balance between sweet and salty!  The nicotine content is 9.5mg/g for 0.9gram portions.  So it's slightly stronger than your average strength Swedish snus, but not too strong.  It's not noticeably stronger to me, at least.

Though this snus didn't have the flavor profile I had hoped for, I did enjoy it and would definitely order it again!
Posted by Chad Jones at 2:53 PM