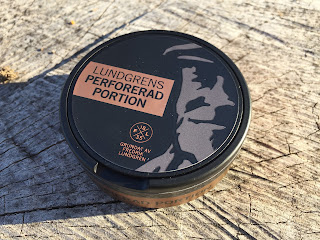 When I first reviewed Lundgren's Peforated White Portion, I was rather excited about the concept of an original portion. Now, my hopes have been answered and Fiedler and Lundgren have released an original portion version of Lundgren's Perforated!  These cans have changed a bit since I reviewed them last - they now come with a new design and an innovative new concept called FlexLock (or FlexLid), which is a catch lid with a rubbery material that stretches to accommodate for more used portions. I did an up close and personal video for FlexLock if you wanna see it in more detail.  If you've never heard of Lundgren's Perforated, these are pouches that have little holes in them which allow for a quicker release of flavor.  These being an original portion and a perforated portion, the flavor comes on quicker than your average original portion! 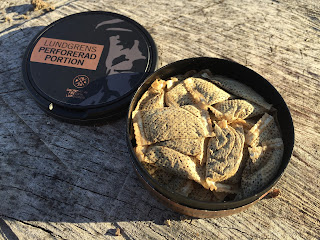 The product description says, "Portion snus with perforerad pouches, to enhance the flavor and fit. Rich tobacco taste where you find dark notes and sweetness, with hints of meadow flower and herbs. The can has a flexilid. The space where you put your used pouches expands to fit more."

When you open a can of Lundgren's Perforated Original, the aroma that comes through is a nice balance of floral notes, mild tobacco character and herbal notes.  The portions are very comfortable in the lip, and even though they have little holes in them you don't have to worry about tobacco coming out of the pouch.  I've never had it happen with any perforated product. The flavor is sublime!  There is a mild tobacco character accompanied by a light and airy, slightly sweet floral presence.  There's also a nice, gentle herbal flavor that comes on and a little salt balance as well.  I don't notice any pepper in this snus, which is good, because I feel like it wouldn't go well with the flavor of this snus.  This is definitely one to try out if you're a fan of complex flavors, because this snus has a lot going on!
Posted by Chad Jones at 5:45 PM