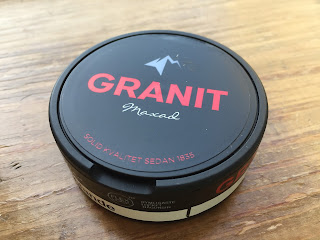 I've been catching up on video review on our YouTube Channel, and I hadn't done a review of Granit Maxad, so I grabbed a can in a recent order from SnusCENTRAL.com. I was surprised to see that the product had changed from the last time I tried it. Back in 2013 when I reviewed this product, it was called Granit Maxad Svart, and it was a maxi portion with a black colored pouch. Now the portions come in the original color, but same size and can.  So, I was surprised to see that when I opened the can.  I figured since the product had changed, I would do a new review of it.  I originally did this review on 1 January, 2016.  The can design changed, however, so I wanted to do an updated review of it.  Along with the new design, the can also has the FlexLid - which is a catch lid that grows as you add more snus to it!

The flavor description for this product says, "Granit Maxad Portion Snus is the last of the maxi portion snuses.  Granit Maxad has the traditional Swedish snus tobacco-centric flavor but with over a gram of snus crammed into each pouch! Strong nicotine strength.”  This product comes in a 21 gram can with 18 portions for 1.12 gram portions.  The nicotine content is 12mg/g or 1.2%.  With bigger portions and more tobacco this means there is 14mg/portion of nicotine! 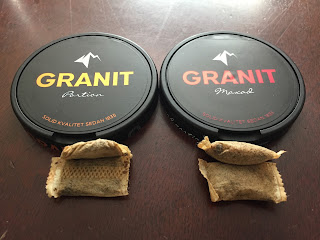 I wanted to do a comparison of this product and Granit Original Portion. For comparison - Granit Original portion is a 19.8 gram can with 22 portions for 0.9 gram portions. Since Granit Maxi is 1.12 grams per portion that means the Granit Maxi portions have 25% more tobacco, or 0.22 grams more tobacco.  That may not seem like a lot.  I use 1 gram portions, so honestly these "maxi portions" don't feel too much bigger than what I'm used to.  But if you're used to 0.9 gram or less portions, you may notice this one to be bigger in the lip. 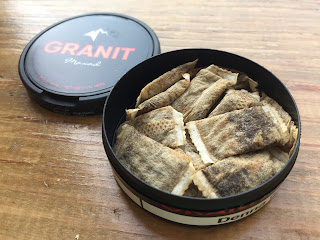 The portions definitely feel more plump in the lip, but they aren't non-discreet by any means. They have a really nice moisture balance; they're in that sweet spot right between an original portion and a white portion.  The flavor releases pretty quickly, but also lasts longer than your average original portion.  When you open a can, you'll notice the aroma is very balanced.  A nice, mild smell of citrus comes through and a pleasant earthy tobacco smell.  The citrus smells a little more lemony, and is more mild than the average bergamot smell.  The flavor is a very pleasant balance of citrus and tobacco.  The citrus comes through as a gentle orange/lemon flavor - it isn't too sour and it isn't too sweet.  The tobacco flavor comes through as a mellow, earthy tobacco taste and is accompanied by a nice pepper flavor with just a touch of salt.  I haven't had this snus in a while but was quite impressed by the taste.  I would definitely order this one again!
Posted by Chad Jones at 7:20 PM