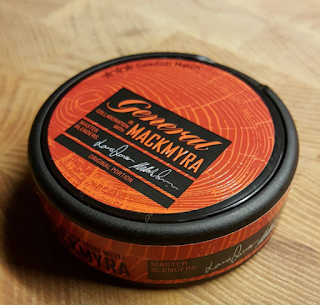 In 1994, Swedish Match launched Probe Whisky snus. Over the years, whisky hasn't been the most represented flavor of Swedish Snus, but that has been changing lately. In 2014, Conny Andersson, formerly of Swedish Match, launched Islay Whisky Snus during his time with GN Tobacco. In 2015, he launched another whisky product, Crafted Snus: Whisky with AG Snus. Now, it seems that Swedish Match is joining in the fun and launching another whisky snus - General Mackmyra. We discovered this photo this morning on Instagram. Mackmyra is a Swedish whisky and the flavor description of this whisky says, "Mackmyra's core expression is a light Swedish whisky matured primarily in first fill bourbon barrels but also includes whisky aged in Sherry and Swedish oak casks too as well as some smokier malt, which all adds to the complexity."  On Instagram, "reallybadcorrosion describes it as "definitely on the peaty side like the whisky. A faint sweetness on top of the original General portion smokiness and taste. Not at all as sweet as Probe. The peat flavour is fairly dominant." 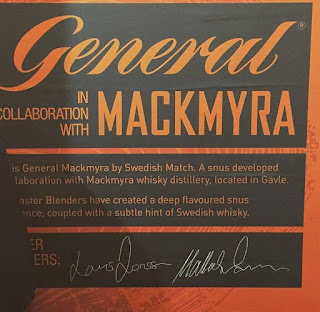 This photo via "fahlqvisttobias" on Instagram says a little more about the product.  "General Mackmyra by Swedish Match.  A snus developed in collaboration with Mackmyra whisky distillery, located in Gavle.  Master blenders have created a deep flavored snus, coupled with a hint of Swedish whisky." 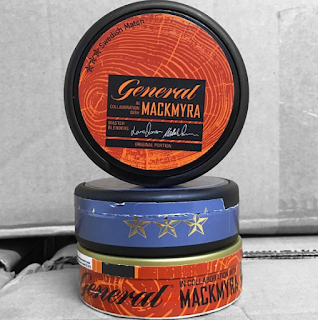 I saw this picture, via "andersdala" on Instagram, and noticed something interesting.  The bottom can has a gold lid, which makes me think there will also be a loose version of this snus.  The bottom part of the can with the gold lid looks to be a paperboard material much like Swedish Match does with their los products. 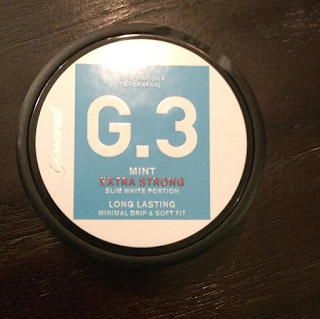 Back in November, we reported that Swedish Match was launching two new products in early 2016 - Grov XRANGE Original and General XRANGE Salmiak. We now have another one to add to that list - General G3 Mint Extra Strong Slim White! I reviewed the original strength version back in early 2015 and enjoyed it, describing the flavor as "...a straightforward peppermint flavor. Comparing this one and General Mint, this one tastes more natural and doesn't taste as sweet as General Mint does."  I look forward to seeing how the Extra Strong tastes and feeling how strong the kick is! 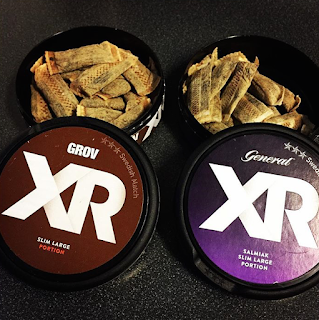 Update - Reviews are posted for Grov XRANGE and General Salmiak!

29 November 2015:  Snuslagret.se posted this photo on their Instagram page this morning which shows two new XRANGE products being launched - Grov XRANGE (Slim Original) and General Salmiak XRANGE (Slim Original).  I must be honest, I am excited about both of these.  I've been hoping for a tobacco centric snus in a slim portion for a while, so I look forward to trying the Grov to see how it rates.  Also, my favorite licorice snus produced, General Licorice, was recently discontinued, so I hope the flavor of General Salmiak XRANGE is similar in flavor profile.  I just mentioned a few days ago how I hoped we would someday see a slim original licorice snus, so I'm definitely excited to try this!  At this time, I don't have much more info than this, so I'll update this article as I find more info.
Posted by Chad Jones at 6:52 AM