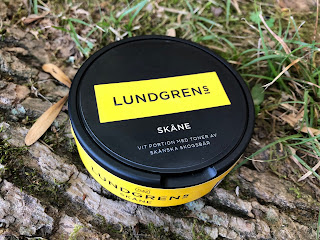 When Fielder and Lundgren began releasing products under the Lundgren's label in 2015, I was impressed by the interesting concepts they were developing. Lundgren's Vit introduced the perforated white portion. They also introduced pre-baked los with Lundgren's Forbakad. Both of those products are gone, but the perforated white portion remains! Today, I'm revisiting my favorite product in the Lundgren's line - Lundgren's Skåne Vit! The flavor description for this product says, "Lundgrens Skåne White Portion Snus is an organic snus made with Swedish grown tobacco from Fjälkinge, Skåne, Sweden. This is a traditional snus with a rich tobacco flavor with meadow flower, spruce needle, and hints of forest berries. It comes it perforated white portions which quickly releases flavor but runs slower than an original portion snus." This product comes in a 21.6 gram can with 24 portions for 0.9g portions. The nicotine content is 8mg/g (0.8%) which breaks down to 7.2mg/portion. 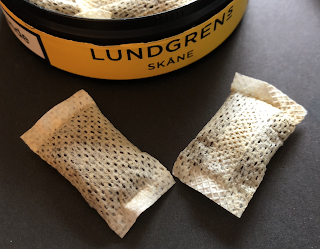 This is what perforated portions look like. Fielder and Lundgren describe this format by saying "The bag allows you to get closer to the tobacco and therefore provides a greater treat than other white portion snus can. With the same sleek feature that snus is less runny and feels fresh lower lip. A new kind of pouches with a perforated bag for the taste to come out faster and feel more."  In case you're worried, the tobacco doesn't come out of the pouch.  I've gone through maybe 20-30 cans of Lundgrens snus over the years and I've never had tobacco bits come out into my mouth, so don't worry! 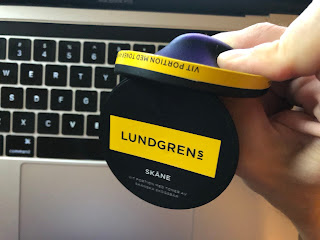 Another revolution that Fiedler and Lundgren introduced is the FlexLid, or FlexLock. Instead of a plastic bottom like most snus cans have, Lundgren's products have a rubbery one. It actually grows and expands the more you add snus. I did a big in depth video on it a while back if you want to check that out.  As someone who uses the catch lid often, this is something that I really dig.  I can also put a bunch of other portions up there if I'm going out and only want to bring one can with me.  I know this isn't a big deal to some, but it's something I really like about this product! 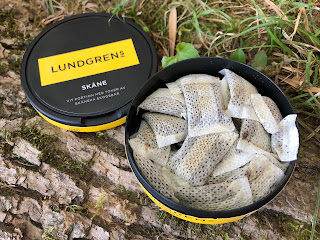 When you open the can, the aroma is a mix of berry and mild spruce. I'm not sure what forest berries are, but it smells kind of like a cranberry and a cherry mixed together, but not as sweet. The portions are, again, perforated - so the flavor releases quicker than your average white portion.      The taste is absolutely delicious.  The berry flavor is pretty present, and like the aroma it tastes like a mild cranberry and a less sweet cherry if I had to compare it to anything.  The spruce flavor is right behind that, and then there's a mild herbal/floral character in the background.  The longer you have it in the more you'll notice a very mild tobacco character in the background.  The nicotine on this one feels to be about regular strength, and I find the flavor lasts up to an hour!

In terms of the Lundgren's line, this is one of my favorites and an absolute must try!
Posted by Chad Jones at 9:16 AM