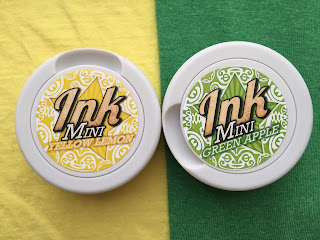 A little while ago I reviewed Ink Chewing Bags - Ice, Original, Original X-Strong and Licorice X-Strong by AG Snus.  Lately, a lot of snus manufacturers have been releasing "chewing tobacco" or "chewing bags" because they're basically the same thing as snus, but the difference is the name.  By calling a product "chew" or "chewing bags" it is legal to be sold in the EU.  Yes, I know that's silly, but so is the EU snus ban. V2 has also done this with Thunder Chew and Thunder Chew Bags as well as Al Capone Chew (Vanilla and Mint).  It's silly that this has to be done, but it allows harm reduced tobacco products to be sold to people in the EU who may not have regular access to Swedish Snus.  I was really excited about these two products because lemon and apple aren't common flavors sold in the Swedish Snus world.  These are the first mini products sold as "chew bags", so it's nice to see some diversity in the market.  These are 12 gram portions with 22 grams per can, so about 0.54 grams per portion.  These products are made by AG Snus and distributed under the Ink name by Mac Baren. 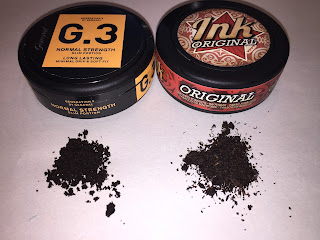 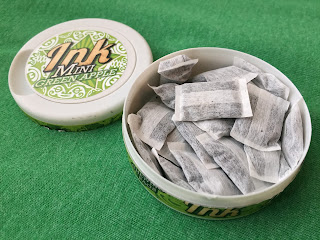 The flavor description says, "This is the Ink Mini Green Apple with a nice fresh apple flavor in small chewing bags."

When you open the can, the aroma that comes through is a mild and slightly sweet apple smell. If you've ever had green apple Jolly Ranchers, the smell reminds me a lot of those.  Though the portions don't have as much moisture as the usual Swedish Snus, they still feel comfortable in the lip.  The flavor is a very light and mild apple flavor with a slight touch of sweetness in the background.  I would estimate the nicotine content to be between 4mg/g-6mg/g.  This one is definitely a tasty snus! 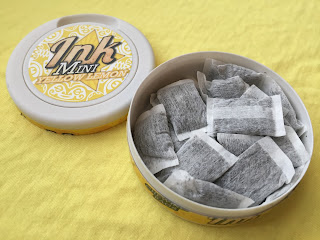 The flavor description says, "This is the Ink Mini Yellow Lemon with a nice fresh lemon flavor in small chewing bags."

When you open a can, the aroma that comes through is a mild lemon smell.  It's not really sweet, but it's also not really sour.  It's a pretty natural smell. The flavor is quite pleasant, as well. If you've ever had Lemonheads candy, it kind of reminds me of those. The flavor is a very mild and natural lemon taste. As with the aroma, the flavor isn't excessively sweet, and it's not overly sour. It's just a mild, pleasant lemon flavor.  As with the green apple flavor, I would guesstimate the nicotine content to be between 4mg/g-6mg/g.

If you're looking for a different flavor in a mini size, I would definitely suggest both of these.  I found the flavor of both to be very enjoyable!
Posted by Chad Jones at 2:03 PM