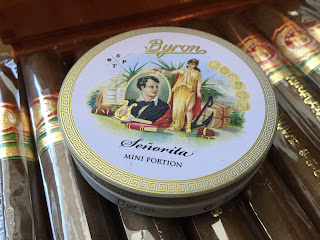 Byron is a Swedish Snus made with Cuban tobacco. In the past, SPT made their Cuban tobacco snus under the brand Montecristo and Romey Y Julieta, but recently changed their products over to the Byron brand.  This product was formerly known as Romeo Y Julieta Señorita.  The product description says, "The tobacco blend is basically the same but the size and appearance differs Byron Senorita Mini from his brothers. The design is a nod to snuff venerable background. If you look closely, you can almost see its Cuban cigar predecessors wrapped in their beautiful porcelain jars. During nearly two centuries Byron created, shipped and sold cigars to an exclusive group of the world.  And we will give you snuff counterpart. "

Many of you may know, President Barack Obama recently called for an end to the Cuban Embargo and began easing sanctions with Cuba. It's still not legal to buy Cuban products online, although US/Cuban ties have been restored and travel to Cuba should be beginning soon, as well.  From what I understand, it's no longer illegal to own Cuban cigars/tobacco, and you can bring small amounts of Cuban tobacco/cigars back to the US with you, but you can't order it online. 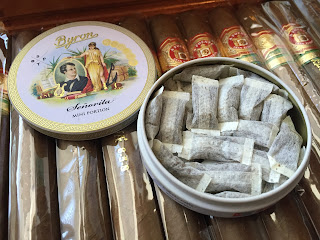 Compared to Byron White Portion, these are much more dry. In fact, some stores list them as "Dry White Mini". I like the artwork on this can a whole lot more than the other Byron cans - the mural on the face of the can is very attractive. It reminds me of the artwork that comes on their cigar boxes.  The aroma of this snus is less aromatic than the other Byrons, it's a much more mellow Cuban tobacco smell with a slight hint of pepper.  Being a dryer portion, the flavor takes longer to develop, but once it comes on it's pretty pleasant.  It's a very mellow taste of Cuban tobacco, a light taste of bergamot, and mild hints of spice and pepper in the background.  I personally prefer the more bold flavors, I think that it's a better experience when the flavor is more present, but I know quite a few folks who like this.  So even though it's not something I would order regularly, you can still give it a shot if you like minis, or want to try a Cuban snus in a more mild form.  If anything, buy a can just to have a can of it in your collection, because it's a gorgeous can design!
Posted by Chad Jones at 1:33 PM