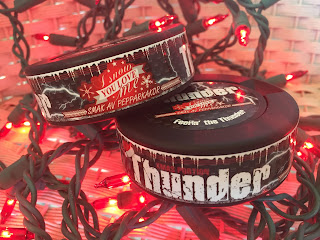 V2 has added another new product to their Christmas Snus line this year - Thunder "I Snow You Love Me" Gingerbread Extra Strong Portion. To simplify it, we'll just call it Thunder Gingerbread. In the past, they've released Offroad Julesnus (formerly Nordstrommen Julesnus) which will be discontinued this year.  Last year they added Thunder Frosted Christmas. This year, they're going a step further and adding another new Christmas snus to their product line, which I couldn't be more excited about. I love anything related to Christmas, it's my favorite time of year!  I've seen this snus described as having "...a taste of gingerbread."  The cans are really neat, they actually say "XMAS PORTION" above the Thunder logo.  Along with the usual Thunder lighting bolt design, there are icicles along the can, as well.  It's a really neat looking can - it takes the usual Thunder design but adds a Christmas flair to it.

In case you were wondering, the term "pepparkakor" on the can is Swedish gingerbread, which usually come in a thin cookie format.  They are made with ginger, cinnamon and cloves amongst other things. 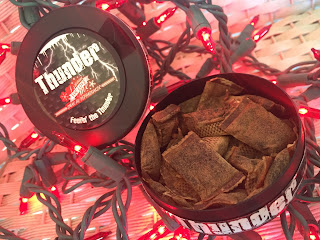 When you open the can, a very baked/breadlike quality comes through.  Being a Thunder snus, the portions have a decent moisture amount and a quick release of flavor and nicotine.  The aroma of gingerbread is definitely very present.  The flavor of gingerbread is easily detectable as the predominant flavor, but notes of cinnamon stand out amongst the flavor of ginger.  You can also detect small notes of clove in the background.  There is a strong nicotine kick which comes along with this being a snus in the Thunder line.

This is definitely a great addition to the V2 Christmas line.  I'm a big fan of gingerbread so I really hope this product sticks around!
Posted by Chad Jones at 1:27 PM