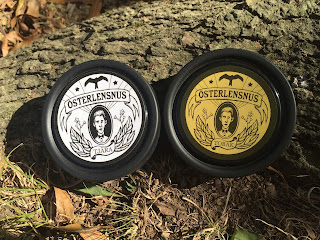 It's 2015, and Österlensnus is back! Österlensnus Tobak is available now in three stores - Vitaby, Brösarp and Skillinge, and there will be one more added in Simrishamn. Österlensnus Tjära should be available around Christmas.  He hasn't made it available online yet, so if you want some you'll have to grab it in Sweden or find someone to send you a can.  This year’s Österlensnus is made with Alida tobacco, which is the same as they used last year. Apparently, Eskil got some complaints last year about it being too moist, so this year it is a little dryer, he tells us. There’s around 1500 cans of this year’s batch made. There’s also another product he made in addition to Österlensnus Tobak.  A new flavor in 2015 is called Österlensnus Tjära, which has a little taste of birch tar, which he burns and distills himself. 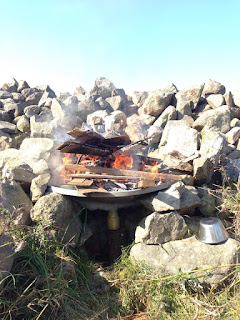 The Tjära is very interesting. Eskil told me as a child he enjoyed Finnish pastilles with this flavor and he fell in love with it. Today, they are relatively rare in Sweden but you can still find and order them online. The flavor reminds him a lot of old wooden boats he spent time fishing on as a small child. In the photo you can see how he burns the birch tar. He uses a fire in a bowl and in the middle of the fire there is a can packed with birchwood and turned upside down. Under the can is a small hole where the tar drips down as the temperature rises. Under the bowl is a glass container which picks up the "black gold", as he calls it. After this he distills it and separates the fluid he uses as an aroma in this snus. 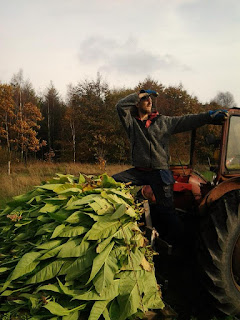 If you missed last year’s review of the 2014 batch, here’s a little background. Österlensnus is made by Eskil Thomsen. He grows tobacco on his farm to make his own snus. The name comes from a region of Sweden he lives called Österlen, which is in the south part of Sweden.

Eskil is part of a growing community of craft snus makers including our friend Conny Andersson of Craft Snus/AG Snus. The Swedish Snus scene is much like where the beer scene was 15 years ago, with small companies popping up and making small batches of exclusive snus products, much like when micro breweries began growing in popularity.

This is a craft snus/small batch snus in all aspects.  This snus is made in small batches right there on the farm.  The snus goes into the can in the same place where the tobacco was born. 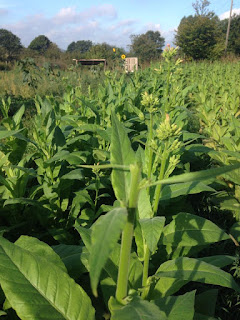 When it comes to the snus, he doesn’t use binders, humectants, smoke flavorings, sweeteners, colors or extra nicotine. He relies on the tobacco “just as it is”. In the can you’ll find tobacco, water, salt, and soda. Just as simple as can be! For the production, they do it all. Sowing, planting, picking, curing and pasteurizing. The tobacco is air cured in a barn and then the leaves are picked daily as they change color - this process can take up to three months! The tobacco is then transferred to 2 large ovens and is pasteurized, which yields about 8 kilos at a time.

Österlensnus is truly a labor of love and it shows in the product quality, aroma and flavor.  From start to finish this is truly a craft snus, and the work that goes into it is very apparent in the quality of the snus itself. 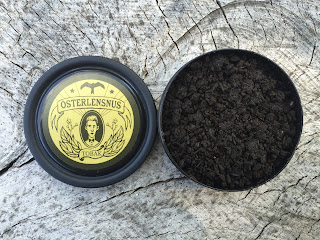 I reviewed Österlensnus Tobak back in 2014 and fell in love with the simple flavor.  The can design is very simple - Österlensnus comes in a simple black can with a label on top.  No fancy design, just a simple label.  Being a craft snus, this product doesn't need a fancy label or gimmick because what is most important about it is what's inside the can, not what's on the outside.  When it comes to the grind of this snus, you can use a tool or you can handbook, it's really up to you.  However, I suggest handbaking.  I found the snus stays together better when I handbake it and can compress it more tightly.  When you open a can, the aroma of tobacco comes out to greet you.  It's a rich, earthy, natural tobacco smell.  The prilla feels great in the lip and stays together very well.  The lowered moisture amount didn't detract from the flavor or comfort of the snus at all.  The flavor of this snus is very tobacco-centric.  Alida tobacco naturally has a great flavor, and this snus builds on that.  No flavors are added to add to or take away from that flavor.  The natural, earthy flavorful tobacco is front and center, a slight hint of smokiness and just a little salt in the background to accentuate the flavor.  It's a very simple flavor, but the beauty of Österlensnus Tobak is in that simplicity.  Just natural, earthy, rich tobacco taste with no gimmicks. 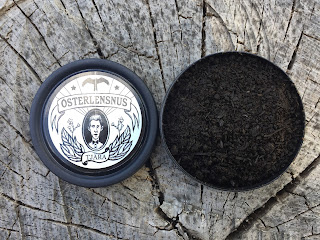 I was very excited to try this one.  Outside of the workers on the farm, nobody else has tried this flavor.  If all goes according to plan, it may be released around Christmas time.  The can design, as with Tobak, is very simple.  It comes in a simple black can with a label on top.  Nothing fancy, no gimmicks - and that works with this snus.  This is a craft product, and it's not what's on the outside that matters, but what's on the inside.  As I mentioned above, Eskil uses Birchwood to add a tar-type flavor to this one.  It reminds me a lot of pipe tobacco.  The aroma that comes through is a earthy tobacco smell with a smokiness to it that reminds me of mesquite and a little tar.  If you've ever used birchwood to smoke meats, it reminds me a lot of that.  The added birch tar works really well with the tobacco flavor. If you had General Smoky Oak in the past, the flavor is very reminiscent of that one.  There is a rich, earthy tobacco flavor with a little smokiness, a little tar, a little hickory/mesquite type flavor, and a little salt that helps accentuate all those flavors.  This is an absolutely delicious snus and the birch tar added to the flavor works really well with the senses, not just the taste but also the aroma.  It reminds me a lot of being outdoors and barbecuing.  This is definitely a snus I would enjoy if I was by a campfire or cooking out.

I can't say enough good things about Österlensnus.  Both of these products are great.  Tobak is a back to the basics type of snus that really focuses on the tobacco flavor.  Tjära has that great tobacco taste of the Alida tobacco, but also has an extra presence of tar and smokiness that works really well with the flavor.  If you're somewhere where you can get Österlensnus, I definitely suggest trying it out!
Posted by Chad Jones at 2:06 PM