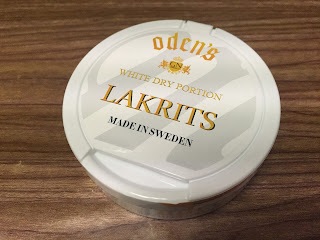 I'm a big fan of Oden's Lakrits. When I rank my favorite licorice snus flavors, Oden's always ranks in the top 3. I prefer the Oden's Lakrits (Original Portion), but this one is quite good, as well! It's been a while since I've had it, but Snus24.com just started selling it to the US so I grabbed some for this review! The product description says, "Odens Licorice White Dry Portion. If you like the clean and deep licorice flavor but want a snus in portion with a lower moisture content than the regular licorice is this a snus for you." 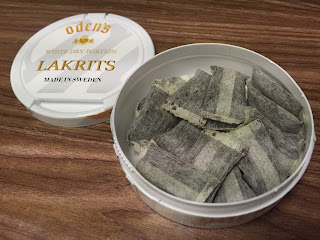 When you open the can, you'll notice the portions are dryer than your average white portion. However, I've noticed lately that GN Tobacco's white dry portions have increased in quality and aren't as dry as they used to be. They're still dryer than a white portion, but more comfortable and soft than they used to be. The aroma is a mild, mellow and straightforward licorice smell. I mention this in most of my Oden's Lakrits reviews, but it reminds me a lot of the black Jelly Belly jelly beans. The flavor is very much the same. A very straightforward, mellow licorice taste. Just a touch of sweetness and hardly any tobacco taste to speak of. The only time I really notice the flavor of tobacco is when I have the portions in for an hour and a half to two hours. But other than that, the main flavor you get is a straightforward licorice taste.  If you're a fan of licorice snus, I definitely suggest giving this one a try!
Posted by Chad Jones at 7:24 AM