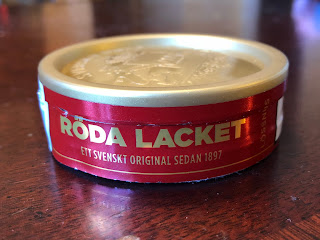 This snus is another personal favorite of mine, and one that (now) only comes in lös.  It used to come in a white portion version, Swedish Match discontinued it in 2016.  This is also an old brand.  It was originally launched in 1850 (and the trademark was registered in 1897), so it's been around a while; it's second in age only to Ettan!  It's remained virtually unchanged, except for in 2006 when Swedish Match "strengthened the flavors".  Röda Lacket means Red Seal, which may sound familiar to some Americans, as there is a Red Seal dip/moist snuff sold here in the US.  Back in the day, a company in New Jersey would import some Swedish Snus brands into Midwestern market for Swedish immigrants. Red Seal would eventually become a dip product and is still for sale in the US as a budget brand.  Red Seal in the US today is nowhere near as good as Röda Lacket, nor does it taste similar, but it does still exist, albeit in a completely different form.  If you want to know more about this, there is a great article written at SnusCENTRAL.com about it, and how Swedish Snus influenced dip in America.

The flavor description for this product says, "Dark tobacco character with elements of leather and dried fruit, and some dried herbs and smoke." This product comes in a 42 gram can with a 7.5mg/g nicotine content. 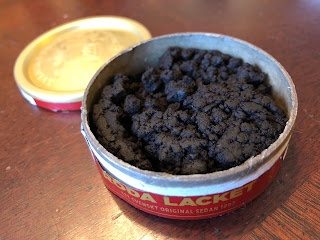 When you open the can, the aroma that greets you is a dark, robust tobacco smell with a little smoke, and a hint of fruit. The fruit is hard to describe, but it reminds me a little of cranberry and perhaps a muted strawberry. The los, being a Swedish Match product, is extremely easy to work with. It's simple to bake, stays together really well, and feels quite comfortable in the lip! The taste is virtually identical to the aroma. The tobacco flavor is dark, rich, and robust. There is a little smokiness in the background, as well. The fruit taste is present, and it's more of a dried fruit type of flavor. It reminds me a little of a gentle cranberry flavor and a muted, not so sweet strawberry taste. I've heard other reviewers mention licorice in the past, but I've never really noticed it in the flavor of this snus.  The flavor on average lasts about 45 minutes, and the los stays together really well the entire time!  The nicotine strength feels to be about regular strength with a 1 gram prilla, but that can change depending on how big you bake your prillas.

If you're new to lös, or looking for something a little different, this is definitely worth a try!
Posted by Chad Jones at 5:22 PM