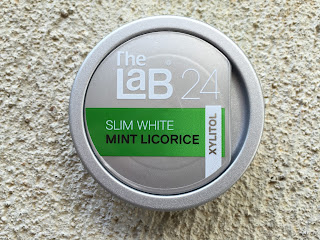 Swedish Match recently announced they would be discontinuing The Lab Fresh Series and adding two new products to the Lab Series - Lab 22 (Mint) and Lab 24 (Mint Licorice), both slim white products and both containing Xylitol. Both of these products also add fluoride. I'm not too familiar with Xylitol so WebMD was a great help. I'll hit the high notes, but you can read up on it if you want to know more. Xylitol is naturally occurring and used as a sugar substitute. Xylitol is also said to prevent tooth decay and can act against some bacterias that cause infections.  When it comes to The Lab 24 (Mint Licorice), the flavor description says, "The Lab 24 Licorice Mint Xylitol Slim White has a bright tobacco character with clear hints of anise and eucalyptus, as well as a touch of peppermint and licorice."

I'm not sure why Swedish Match feels the need to blend mint and licorice in one snus. I wasn't the biggest fan of General G3 Licorice Mint, so I didn't have high hopes going into this one, either. 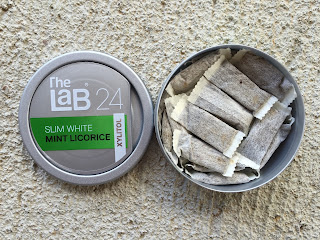 When you open a can of Lab 24 Mint Licorice, you'll notice the portions don't come in the star formation. They are also slim/white portions and very comfortable in the lip. The aroma is a present smell of anise and a little bit of eucalyptus. For those not familiar with anise, it tastes kind of like fennel.  The portion has a mild cooling sensation that comes on when you put a portion in, probably due to the presence of eucalyptus in the flavor.  There is a mild sweetness in the flavor and a light presence of peppermint, a little eucalyptus, and a light taste of licorice.  I've never had Xylitol before, but I'm assuming that mellow sweetness in the flavor is due to the inclusion of it in the recipe.

Much like with General G3 Licorice Mint, I'm not a big fan of this one.  I'm sure there's a market for it, but I don't think I fall into that category.  I'm not sure why licorice and mint needed to be blended into a snus.  It's like spaghetti tacos.  Spaghetti is good.  Tacos are good.  But there isn't a need to make spaghetti tacos.  It isn't a bad tasting snus, but it's not particularly something that I would want to buy again.
Posted by Chad Jones at 2:08 PM